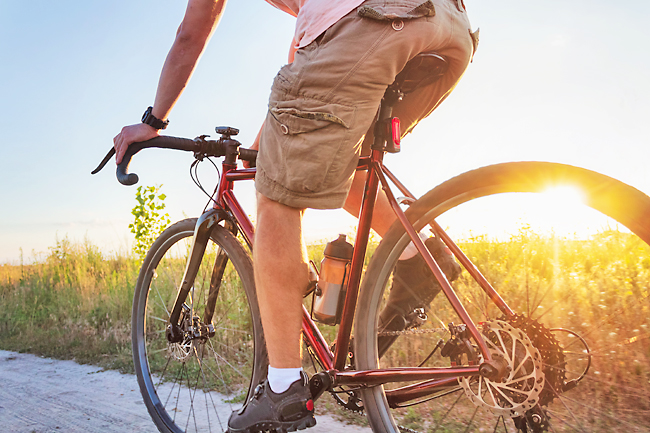 Why You Should Try Gravel Biking

THE WASHINGTON POST – Krystal Salvent was an avid road cyclist – until she found herself lying in a ditch after a driver ran her off the road. This experience prompted Boulder, Colorado, co-leader of Black Girls Do Bike Denver to buy her first gravel bike. “If I can remove that hurdle for myself and focus more on riding my bike, the rocks and maybe the rattlesnakes, I think I’ll be a little better,” she said.

Salvent represents the growing community of gravel cyclists, who prefer to pedal along fields and forests rather than cars and trucks for safety reasons. The last 10 years have seen a 37% increase in accidental cycling injuries.

Gravel bikes feature gearing and geometry similar to road bikes and the wider knobby tires of a mountain bike. Although they lack the shock-absorbing suspension forks and rear shocks of mountain bikes, gravel bikes provide access to off-road terrain, including muddy trails, dirt roads, and paths. of crushed gravel.

Pedal 2 the People co-founder Rachel Olzer, a cycling community of color, attributed much of gravel’s popularity to its accessibility. She said many cyclists want to avoid traffic and explore remote areas without the challenges of mountain biking, which include a steep learning curve and a degree of fearlessness required to stay upright in technical terrain.

The gravel bike, which typically takes riders over more forgiving terrain, has a relatively low barrier to entry. Inspired to explore gravel cycling but not sure where to start? Here are some factors to consider.

Start with a shorter route and park at the trailhead “in case you come across any kind of pickle where there are five miles and it’s actually a lot harder than (you) thought “, suggested Olzer.

One of the most important considerations in route planning is the surface you are riding on.

“‘Gravel’ is a bit of a misnomer,” said co-founder and executive director of Dirty Freehub Linda ‘Gravel Girl’ English, a Bend, Oregon-based nonprofit whose mission is to share gravel bike paths. The word encompasses a wide variety of surfaces, including gravel of all sizes and textures, pavement, forest roads, fire roads, singletracks (mountain bike trails), and dirt.

Because gravel roads aren’t necessarily labeled as such, talking to other cyclists is the best way to get accurate information about terrain, road closures and potential hazards, English said. Most bike clubs have Facebook groups to share tips, or you can ask your local bike shop for recommendations. Online resources include Gravelmap, which shares dirt roads, and Dirty Freehub, which offers curated routes through the West and details elevation, technical difficulty, cell phone coverage and access. to electric bikes.

Strava, a fitness tracker that lets users share routes, can also be helpful, but it’s not perfect.

Mer Parra, service technician and bike marketing manager at Dirt Rooster Bicycles in Catonsville, Md., said she used the “heatmap” feature, which shows popular routes, to plan a gravel tour at across the country. While that worked out well at times, because these maps represent historical rather than real-time data, she encountered “all sorts of things,” like a washed-out bridge and a flooded path that forced her to reorient herself.

While you should always inflate your tires before a ride, figuring out how much is tricky, English said. The recommended pressure stamped on the sidewall of each tire is an approximate indication. “It depends on your weight, where you ride and the tire width,” but most people ride with too much pressure, English said. Lower pressure gives you more traction on rough terrain.

She suggested free online tools as a starting point and adjusting tire pressure mid-course if needed. “If the road gets thick, washboard or sandy, we let the air out,” English said.

As you would for the road bike or the mountain bike, equip yourself with the minimum of tools to change a puncture. While all cyclists should have a tire lever and some CO2 cartridges or a pump, the extra essentials depend on the type of tire.

Dirty Freehub co-founder Kevin English with his wife, Linda, said if you’re using tubeless tires, you need a small bottle of sealant, a valve core puller (needed for create an opening in which to insert the sealant) and the dynaplugs, which seal punctures and inflate the tires. Many gravel riders prefer tubeless tires because you can run lower pressures without risking the tube pinching against the rim.

Salvent suggested bringing two extra tubes, whether you’re using tubes or tubeless tires, in case you get a major nick, and a multi-tool for basic mechanical issues.