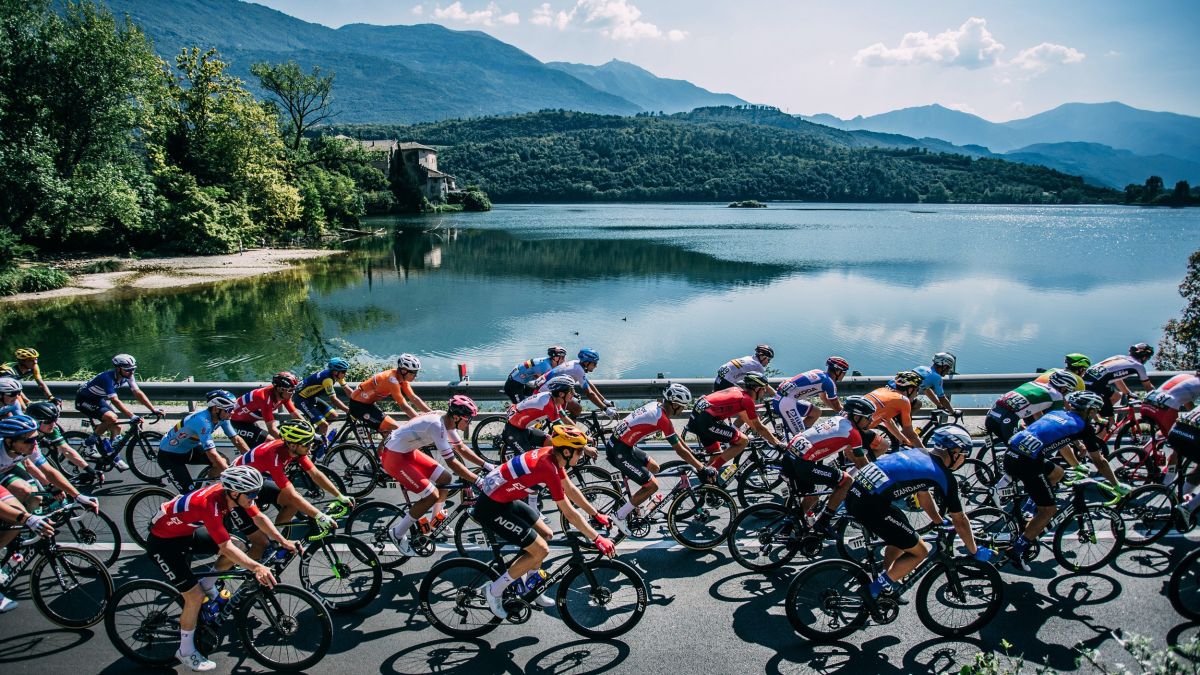 Remco Evenepoel’s agitated attacks were the source of much excitement again in 2021, and in September his aggressive approach brought the European Championships to life in Trento. But unlike his other long-range attacks to win several minor classics, this time he couldn’t shake the stubborn resistance of Sonny Colbrelli, who hung on for life when Evenepoel attacked from around 12 miles away. of the arrival, and even later when their companion Benoit Cosnefroy was abandoned. The difficult part over, Colbrelli was able to comfortably beat Evenepoel in the final, in a hoarse atmosphere of hundreds of jubilant Italian fans.

This year’s edition of Gent-Wevelgem took a long time to get started, but the action that started at the finish at Kemmelberg was well worth it. The final had it all, with race-leading attacks (including a memorable effort by young Briton Jumbo-Visma Anna Henderson), full races forming rungs in the crosswinds and an excruciatingly late capture of Elisa Longo. Borghini (Trek-Segafredo) and Soraya Paladin (Liv Racing). That left a great competitive group sprint to determine the race winner, with esteemed quick finishers Lotte Kopecky (Liv Racing) and Lisa Brennauer (Ceratizit-WNT) losing to Marianne Vos (Jumbo-Visma).

The revised version of Amstel Gold’s post-Cauberg finish continues to bear fruit, as the 2021 edition gave us yet another exhibition of aggressive and unpredictable racing, with a photo finish too close to top it all off. Although not as extraordinary as the show put on by Mathieu van der Poel during the last edition of the race in 2019, the lack of an uphill finish again caused multiple attacks from runners knowing that they could not stand. allow you to hang around and wait for a sprint finish. . The dramatic zenith was due to arrive at the finish line, when Wout van Aert (Jumbo-Visma) and Tom Pidcock (Ineos Grenadiers) were so close that it took ten minutes of scrutiny to determine that Van Aert had won – and so close that some fans remain convinced that the victory should have been Pidcock’s.

This year’s Amstel Gold was one of those great races where the likely winner constantly changed over the last few kilometers. First off, Grace Brown (BikeExchange) took the lead with a solo attack big enough in the last lap to potentially win; then, after being caught 2.5 km from the line, Elisa Longo Borghini (Trek-Segafredo) and Kasia Niewiadoma (Canyon-SRAM) broke free and seemed destined to challenge the victory, only for their movement to collapse spectacularly with only a few hundred yards remaining after Borghini had stopped taking his turn, much to the vocal exasperation of a vocal Niewiadoma; and finally, even as Vos raised her arms to celebrate the line in the resulting 8-woman sprint, it seemed for a moment that Demi Vollering (SD Worx) could have taken the line victory with a late push. .

The inclusion of such a difficult climb as the Mikuni Pass over 30km from the finish meant that it was still likely that the final of the Olympic road race would start early, and indeed the race ended. ignited in the climb with an attack from Tadej Pogačar. The hot topic before the race was whether or not Wout van Aert would survive such a difficult climb, and the Belgian managed to neutralize the attack in an exciting way. Everything was still to play at the top of the climb with a dozen riders still in the leading peloton, causing multiple attacks, with Richard Carapaz and, surprisingly, Brandon McNulty finally going away; and the grip tension continued up to 6 km from the line, when Carapaz dropped his solo mate to gold.

In which other race do you meet Mathieu van der Poel (Alpecin-Fenix), Julian Alaphilippe (Deceuninck-QuickStep) and Wout van Aert (Jumbo-Visma) who face the star climbers Egan Bernal (Ineos Grenadiers) and Tadej Pogačar (Arab Emirates United) ? Strade Bianche’s unique course makes it a unique meeting point for a wide range of the best riders in the world, and this year has been the best edition to date in terms of star quality. The aforementioned runners were part of a group of eight men who got loose on the brutal gravel section of Monte Sante Marie 50km from the finish, and kept us all entertained by tackling each other, along with Van der Poel triumphant with some truly breathtaking acceleration. .

Cycling fans had waited nineteen years for a wet Paris-Roubaix, and it didn’t disappoint. The images of the runners covered in mud speak for themselves and will surely be remembered for years to come. As well as providing such a visual spectacle, the wet conditions also contributed to what was an extremely entertaining race, with decisive moves made early on, great tension as the controversial victory hopes of Gianni Moscon (Ineos Grenadiers) took hold. been dramatically denied by a late dish. tire and fall, and a surprising but very worthy winner to Sonny Colbrelli (Bahrain-Victorious), whose ecstatic celebration at the finish graphically illustrated just how much winning this race means.

Some argue that the Olympic road race was a farce that did not do justice to women’s sport, especially exasperated stars berating the lack of racing radios, who made the fatal mistake of not realizing they had not brought back the last rider of the breakaway of the day, Anna Kisenhofer. But that confusion contributed to the great drama of the occasion, as did the row that followed between the Dutch riders, whose enigmatic beards against anonymous teammates still forced us to unbox what exactly happened long after the end. . They were the big favorites for the win, so for them to have such horribly wrong tactics and allow a rider who even lost her pro contract four years ago, made it one of the biggest upsets of all time and a fairytale triumph of an underdog fighting against all odds.

In a year of aggressive racing, in which long-distance attacks become more and more fashionable in the men’s peloton, no race has exemplified the new gung-ho atmosphere better than the road racing of the Championships. of the world. Just a few years ago, the idea of ​​a team that cut the nearly 200km race to pieces with some of their star drivers would have been unthinkable, but that’s exactly what the French did in Flanders, almost causing the decisive selection of the race. absurdly early.

The French were far from being the only aggressors, as other teams intervened in what has become a sort of general melee; the irrepressible Remco Evenepoel was inevitably involved, his attacks resulting in post-race fallout among the Belgian camp that continue to rumble today. But it was France that was protagonist throughout the day, the multiple attacks of Julian Alaphilippe animating the race at the end of the game as his teammates had done before, and resulting in a resounding victory.

Even before the first weather forecasts announcing potential rains before the race, the first women’s Paris-Roubaix had been greatly anticipated, with a forced postponement of the Covid from spring to October further whetting the appetite. These biblical conditions only served to enhance what was already guaranteed to be a momentous spectacle, unlike anything we had seen in decades, and never before in women’s sport.

The slippery surface made racing a fierce war of survival, where even just standing took a lot of skill – pre-race favorites Ellen van Dijk (Trek-Segafredo), Lotte Kopecky (Liv Racing) , Elisa Balsamo (Valcar-Travel & Service) and Annemiek van Vleuten (Movistar) are among those who have fallen considerably. Rightly so, the race ended in a duel between former masters of sport Lizzie Deignan (Trek-Segafredo) and Marianne Vos (Jumbo-Visma), the former taking the upper hand for once over her longtime rival with an epic solo attack. worthy of the occasion.