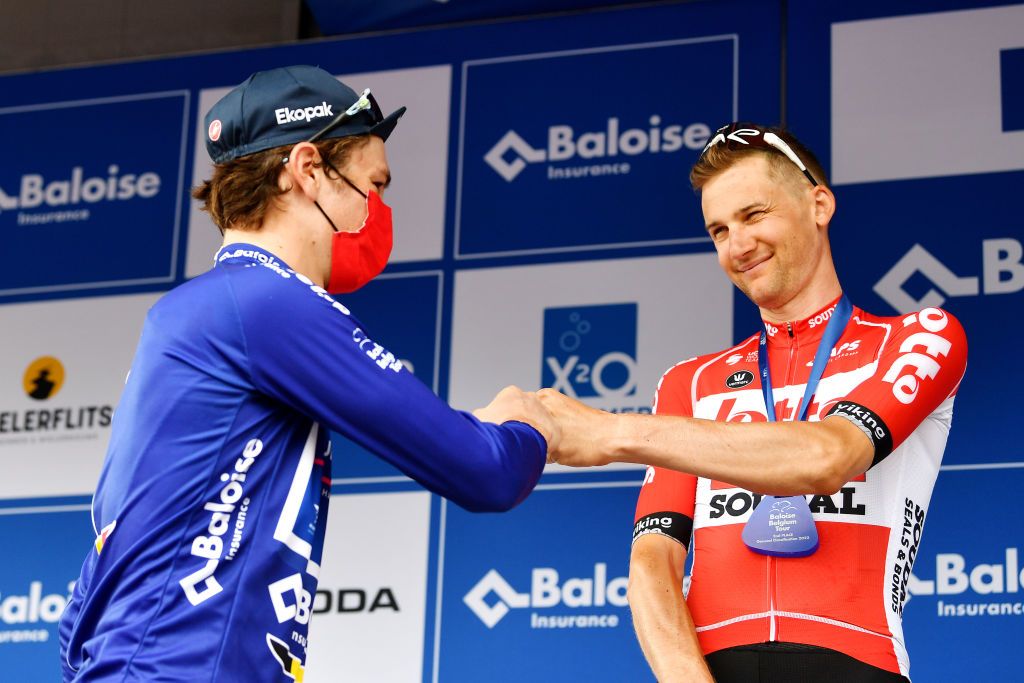 Just a fraction of a second separated Mauro Schmid (QuickStep-AlphaVinyl), wearing the leader’s blue jersey, and Tim Wellens (Lotto Soudal) as the pair headed into the fifth and final race day of the Baloise Belgium Tour to decide the winner. . The golden kilometer final sprint was decisive on the 179.9 km route from Gingelom to Beringen, but a controversial move by one of Schmid’s teammates, Yves Lampaert, disrupted the expected duel.

Wellens took the first three seconds in the lead, which gave him the provisional lead of the race. Schmid then followed with a couple of seconds in the next two sprints, putting him back in the lead. Behind, Wellens was ruled out due to what appeared on TV cameras to be Lampaert blocking his progress, not once but twice. At the third sprint point, Lampaert could be seen leaning over and bumping Wellens on the shoulder.

“Yes, it cost me the victory in the Tour of Belgium. I’m disappointed, but I think we can say that we did everything to try to win,” Wellens said at the finish of his disappointment, and said Lampaert’s shoulder barge was the difference in missing out on the win.

A little over two hours after the stage, the UCI Stewards confirmed in the press release that Lampaert had indeed been disqualified from the race and sentenced to a fine of 200 Swiss francs for “deviation from the chosen track and thus hindering or endanger another runner and an irregular sprint”.

“There was quite a bit of pushing and pulling on both sides. I think it all went pretty well,” said Lampaert, who won the stage 3 time trial and was eighth overall. Wielerflits.

“Maybe it was a bit spectacular in the footage, but that’s racing. Before the first sprint, I myself received a few pushes from the riders of Lotto Soudal.

Wellens explained after the race that if a disqualification for Lampaert was made it would make no difference at the end. He said his Lotto Soudal team controlled the race all day but “that’s how it is” when his team did everything to win.

“As a team, we were going all out for the overall win and we did everything we could to enter the Golden Kilometer in a perfect position, which we also did. Arnaud De Lie got me perfectly launched towards the first sprint, where I took three seconds. The goal was to go flat for the first sprint and then focus on Schmid’s wheel. It looked very good after the first sprint but that went wrong in the second sprint. This move by Lampaert cost me the overall victory but his disqualification doesn’t change anything of course,” he said in a team statement.

“You could also say that I lost the Belgium Tour in the time trial or the Ardennes stage… Anyway, it was a really exciting battle and really fun for the fans to watch. Losing with such a small gap is never pleasant, but as a team we can be proud of the way we raced during the Belgium Tour and it gives confidence for what lies ahead.”

Schmid was 26 seconds off the GC lead heading into Stage 4. After collecting three bonus seconds in the Golden Kilometer sprint, he added more bonus time to place second on the stage and jumped off the sixth place. He took the lead in the race due to the time trial difference between him and Wellens, which lasted hundreds of seconds.

Race organizers said the Golden Kilometer would “spice things up,” and it did just that. By the time the chaos around Wellens was happening, Schmid had several bike lengths ahead and was concentrating on his sprint.

“I haven’t seen that. Of course, I didn’t ask for anything like that. I don’t know what happened, I didn’t see it. But I think both of our teams gave it their all to take the seconds,” the 22-year-old Schmid said. Eurosport after the step.

“I made a mistake in the first of the three sprints. I opened a breach in a roundabout, I don’t know what happened. I just wasn’t focused and had to jump. Then I thought, ‘shit, it’s over.’ i think i lost it [GC] now. We tried to stay calm.

After taking the decisive seconds and still 5km before the finish line, QuickStep changed gears with Fabio Jakobsen fighting for the stage victory, crossing the line easily ahead of Jasper Philipsen (Alpecin-Fenix) and Gerben Thijssen ( Intermarché-Wanty-Gobert Materials). Schmid said it was a special day for the team to focus on their efforts in the GC, which was the first overall win of their career, rather than sprinter Jacobsen.

“I felt today that there was a bit of pressure on my shoulders, but I think everyone believed in me. And for me it’s even more beautiful than Fabio [Jakobsen] could also get the win in the end as he also sacrificed everything today. He basically said, “the most important thing is that we win the GC.” Full support was for me in the sprints so he was on his own and he could still win, it shows how strong he is.

I was able to choose between two cycling cultures, French and English’: Simon Carr on what shaped him as a cyclist