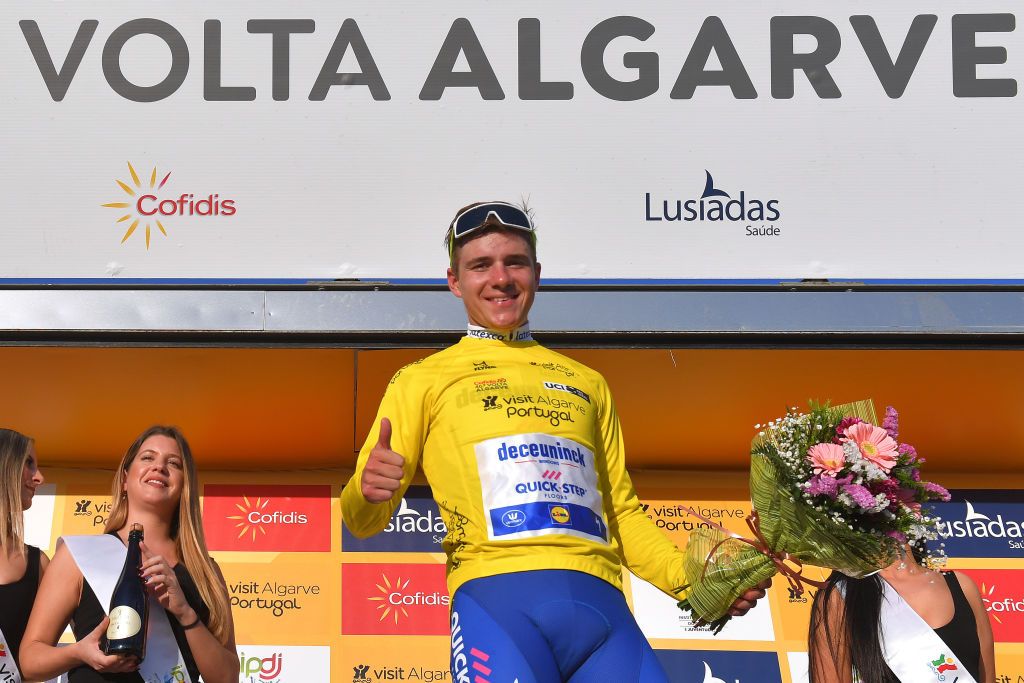 Remco Evenepoel is, according to those around him at QuickStep-AlphaVinyl, a calmer and more mature cyclist in 2022. of the recent Volta a la Comunitat Valenciana, delivering congratulatory punches to the men who finished ahead of him at Alto Las Antenas Maigmó Tibi.

Even so, one can safely assume that Evenepoel’s new Zen has its limits. The defeat at Valencia ended his striking streak of never losing the leader’s jersey in a stage race – he has seven multi-day wins to his name – and, if his short career to date is any guide , a forceful response seems imminent.

Enter the Volta ao Algarve, the next race on Evenepoel’s programme.

Two years ago he delivered his last display before the first coronavirus lockdown by picking up two stages and an overall victory here, and he returns to Portugal this week as the most likely man to claim the spoils in a race that includes two familiar – and gravel-free – summit finishes, as well as a 32km individual time trial.

There are 174 other riders in the Volta ao Algarve peloton, including a former Tour de France winner and a couple of former world champions, but Evenepoel isn’t just the pre-race favourite, he’s the overwhelming box office attraction.

It has always been so. Few riders have grown as publicly as Evenepoel, the only rider to make junior races a showpiece event of World Championship week. Win or lose, the headlines in Portugal will once again be his.

But even though Evenepoel is at the heart of the story, there are plenty of other subplots to follow in the Algarve this week.

Several of them are in the Ineos Grenadiers team, where Geraint Thomas is entering his 16th season as a professional in an event where he has shone in the past. He is joined by the future of the British team, as new cyclo-cross world champion Tom Pidcock begins his road campaign alongside Ethan Hayter, who finished second overall last year. latest, and newcomer Ben Tulett. A deep line-up also sees Dylan van Baarle and Michal Kwiatkowski – winners here in 2014 and 2018 – start their years in Portugal. For Ineos Grenadiers and everyone else, early season races are becoming increasingly important.

The Volta ao Algarve also sees Tobias Foss begin his preparation for the Giro d’Italia leading a strong Jumbo-Visma team, while David Gaudu leads the line for Groupama-FDJ and Sergio Higuita is set to make his European debut for Bora-Hansgrohe after winning the Colombian national road race title on Sunday.

Given his form at the start of the season, Brandon McNulty (UAE Team Emirates) could well be the rider most likely to challenge Evenepoel. The American was climbing very well at Challenge Mallorca, where he was an impressive solo winner of the Trofeo Calvia, while the Stage 4 time trial here should also please him.

Fellow countryman Joe Dombrowski is on hand for his Astana-Qazaqstan debut, although the team are without another newcomer, Gianni Moscon, through illness.

Warren Barguil (Arkéa-Samsic) heads to Portugal after a quick start in Mallorca, although the length of the time trial is likely to cap what he can achieve in the overall standings.

As always, the Volta ao Algarve offers something for everything, and there are two clear opportunities for sprinters. Fabio Jakobsen (QuickStep-AlphaVinyl) looked imperious in the Volta a la Comunitat Valenciana and he has already won twice as the Volta ao Algarve Stage 1 finisher at Avenida dos Descobrimentos in Lagos.

Bryan Coquard (Cofidis) and Mads Pedersen (Trek-Segafredo) also started 2022 with two wins and sparkling form, and they will inevitably be in the game this week. Alexander Kristoff opened his account for Intermarché-Wanty-Gobert with a victory in Almeria, while Tim Merlier (Alpecin-Fenix), Pascal Ackermann (UAE Team Emirates) and Jake Stewart (Grouapama-FDJ) will be keen to stand out here.

Elsewhere, men with creations on the opening weekend, such as Nils Politt (Bora-Hansgrohe) and Yves Lampaert (QuickStep-AlphaVinyl), will be looking to rack up some hot-weather miles in Portugal, while Stefan Küng ( Groupama-FDJ) is still performing very well. in the Volta ao Algarve time trial and he will surely appreciate the extra length this time around.

Defending champion João Rodrigues (W52/FC Porto) leads the challenge at home, and although the field is deeper than it was in last year’s pandemic-postponed May edition, he will expect to be up there in the tough finals in Fóia and Malhão, as will team-mate and Volta 2021 winner Portugal Amaro Antunes.

W52/FC Porto is one of ten Portuguese teams in the peloton and that is a big part of the charm of this event. The Portuguese pelotão, made up of teams that are part of bigger sports clubs, has endured for decades almost independently of trends beyond its borders.

La Volta a Portugal, due to its summer date, has always been an event totally dominated by riders and national teams. The Volta ao Algarve, with its first place on the calendar, allows the rest of the world to taste a fragment of a unique cycling culture.

Each year the Volta ao Algarve features slight variations on a familiar theme, and the 2022 edition has a familiar feel, with two flat days, two uphill finishes and a time trial.

This balanced combination has attracted WorldTour teams to this corner of the world since the Volta ao Algarve moved to its February date almost twenty years ago, and the organization has seen no reason to tinker unnecessarily with this formula. .

Wednesday’s opening stage from Portimao to Lagos winds inland through hilly terrain around the climb to Nave, but the sprinters will battle for victory on Avenida dos Descobrimentos.

The first meeting for the men of the GC takes place on day two as the race climbs into the hills of the Serra de Monchique. The long climbs of Pomba and Picota serve as a preamble to the Alto da Fóia (7.7km at 6.1%), where Tadej Pogačar announced himself in 2019 and where Evenepoel unleashed a thunderous late acceleration twelve months later.

Bengado’s Category 4 climb could cause late chills on Stage 3 to Faro, but the sprinter teams still have more than 20km to secure a fresh peloton finish. This year, the time trial moves to the penultimate day and the organizers have added a dozen more kilometers to the usual menu to create a 32 km event from Vila Real de Santo António to Tavira. The distance is particularly striking given that the whole of this year’s Giro d’Italia is just 26km over three weeks.

In a five-day stage race, this time trial will carry an inordinate weight and further reduce Evenepoel’s chances of victory.

The grand finale, meanwhile, once again returns to the Alto do Malhão, which is tackled twice in stage 5. The climbs of Picota, Vermelhos and Alte are also on the route, but the short and peak of the Malhão category 2 (2.6 km at 9.5%) is where the race will heat up.

Barry Ryan will be at the Volta ao Algarve for Cyclingnews, providing exclusive news, interviews and analysis from the race.

TVS Motor Ranking – Buy: The automaker has done well given the tough times

Are “petrolheads” safer drivers around cyclists? ; Jeremy Vine tells drivers, “Their safety is more important than your punctuality”; Drones – the future of cycling on TV? Should TT bikes be banned? ; Cav on the bridge in Oman + more on the live blog