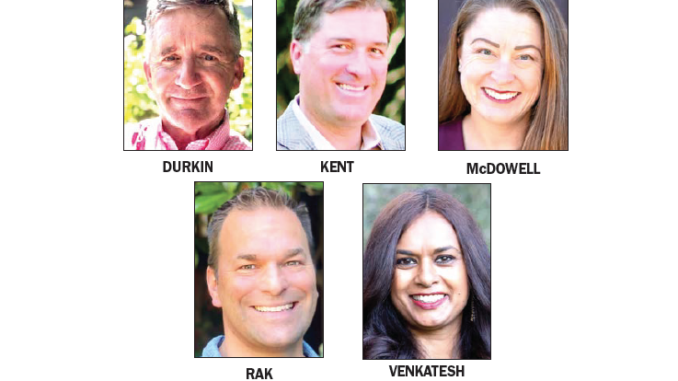 San Carlos residents are voting for three council seats as the city faces unprecedented development on its east side and plans more housing in town.

Incumbents Sara McDowell and Adam Rak are seeking re-election while Councilwoman Laura Parmer-Lohan cannot because she is running for San Mateo County Supervisor. This opens up at least one council seat. Nursery school owner Pranita Venkatesh, Parks and Recreation Commissioner John Durkin and commercial property consultant Alex Kent are all in the running.

Venkatesh commended the city’s current planning efforts, particularly to focus on housing construction and planning along El Camino. She noted that the city must continue to raise awareness and that residents “must understand the need for housing and trust the city and its leaders to make balanced decisions.”
She says the topic she hears the most about during her campaign is the closing of Laurel Street. She said many residents want the closure along parts of the street to continue because of the safety, walking and “celebratory community atmosphere” the closure has created.

Kent is a member of the city’s Community Emergency Response Team, or CERT, and co-administrator of the San Carlos Dog Park, he is politically independent and says he will be able to listen to the entire San Carlos community. He says the board needs an independent “devil’s advocate” to balance “what many San Carlans see as a 100% Democratic endorsement of whatever Sacramento politicians seem to be pushing at us.” Kent is backed by Santa Clara County Republican Leader Shane Patrick Connolly and San Francisco Democratic Leader Alix Rosenthal. His top priority would be “safer streets”, which means less crime and safer routes for pedestrians and cyclists. He suggests the council add more license plate readers to all San Carlos entrances and organize a group purchase of Ring-style doorbell video cameras to help deter and solve crimes.

Durkin is a retail operations specialist and worked at Crate & Barrel at the Stanford Mall. He is a member of the city’s Parks and Recreation Commission, the San Carlos History Museum, and the San Carlos Lions. He also organized the San Carlos Hometown Days Parade. Due to his many hats in the community, he has made many connections and knows how to put them to use doing various things such as organizing food drives. He hasn’t actively sought endorsements and says he plans to spend less than $2,000 on his campaign, saying there’s no need to spend $21,000 on community mail-outs.

Durkin says his top priority would be to make the streets safe by forcing drivers to slow down. This can be done by repainting crosswalks, painting bike lanes green, maintaining roads and adding sidewalks to neighborhoods. He wants to pursue the addition of two deputy sheriffs – one for traffic enforcement and the other for neighborhood patrols.

Durkin notes that growth in San Carlos is inevitable and the city must be prepared. He also said new employees arriving in town should be reminded by email from City Hall not to use neighborhood streets as shortcuts to their offices.

Both Rak and McDowell were elected in 2018.

During his first term, McDowell says his city improvements include pushing to lower the speed limit around schools to 15 mph and for the city to pay $252,500 a year to fund crossing guards at 11 intersections near highways. city ​​schools. She also said the council had approved spending $35 million to improve roads around the city over the next five years.

She says her top priorities would be to make sure the city grows responsibly, which means it improves the community. She also plans to negotiate with developers to ensure the city benefits from the new development. She acknowledges that the east end of the city has seen no change from its industrial uses for many decades, incoming developments in the life sciences will cause “massive transformation”.

Rak is the Senior Director of Government Relations for Trustwave Government Solutions and is currently the city’s Vice Mayor. He has the endorsements of Representatives Speier, Eshoo, and Zoe Lofgren, State Senator Becker and Assemblyman Mullin, as well as numerous former mayors and school board members.

Highlights of Rak during his time on council include working quickly to close Laurel Street to support local businesses, partnering with nonprofits to build 23 low-income housing units, and working on the financing of 30 other houses. He also referred to the street and sidewalk improvements mentioned by McDowell.

Rak says the town is prepared for the development given the time the council has spent “with the community” to better understand concerns about growth on the east side and also to learn the opportunities and benefits of creating a specific plan for the region.

Temporary car insurance in the UK

Cycling is not an easy sport: Williams thinks the sport’s physicality is a deterrent to women