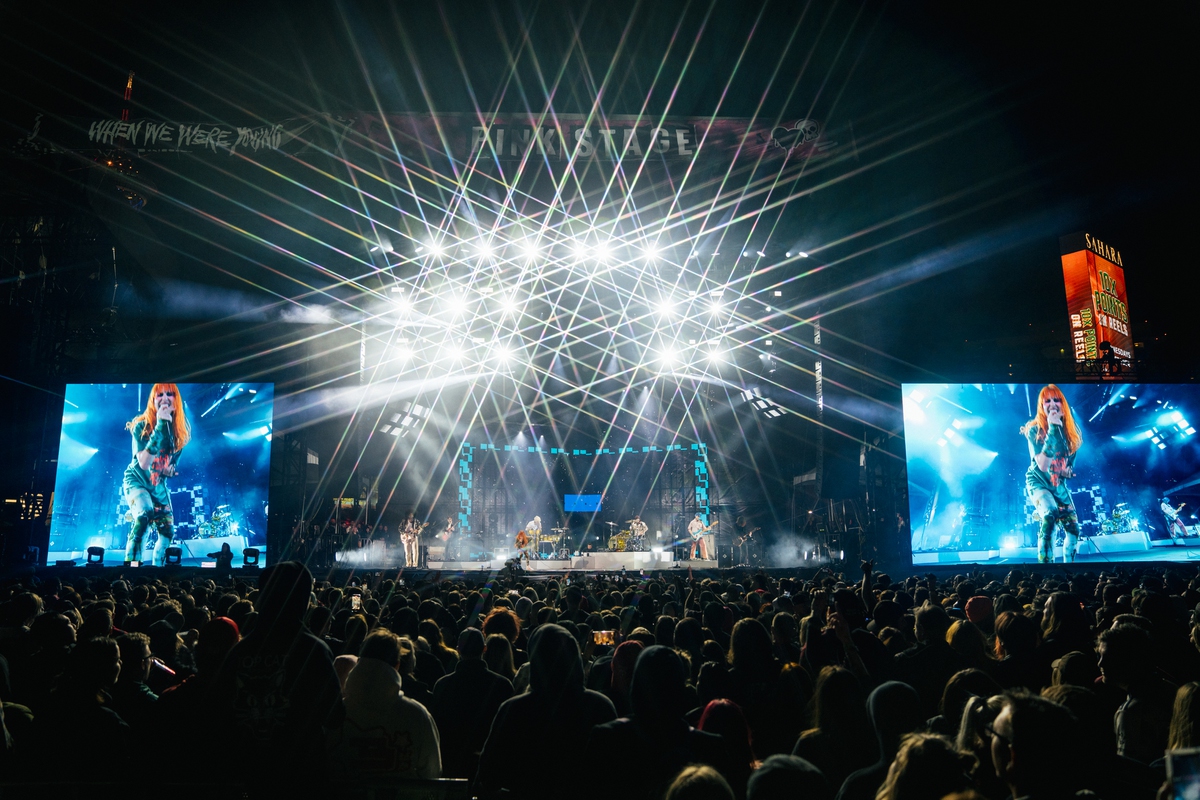 Throwback to the When We Were Young festival in Las Vegas

The news fell on social media like a dark cloud. Less than an hour before doors were scheduled to open for the inaugural When We Were Young festival at the Las Vegas Festival Grounds on the Strip, organizers announced that Day 1 had been canceled due to high wind warnings (which had were scheduled a few days earlier). Day 2 would go ahead as planned, with Day 3 still set to take place on October 29.

Day 1 ticket holders for the trendy emo and pop-punk festival were promised refunds, but that didn’t change the fact that they would miss their favorite bands, some of whom had reunited especially for the festival.

On Twitter, fans expressed their disappointment. “You guys are killing me, I came from Germany for this,” posted one ticket holder. Travelers from New Zealand and the UK shared similar stories. One fan pointed out an irony: “It’s really sad. The people who bought tickets for the first day are the ones who made this success a success and paved the way for additional dates.

“My heart is fucking broken [right now]tweeted a Reno man.

On the positive side, Las Vegas promoters, venue operators and others involved in the local scene quickly stepped up to do what they could to save the day for some. Word began to spread of a free All-American Rejects show at SoulBelly BBQ on Main Street that night. Patrick “Pulsar” Trout, the promoter of Pulsar Presents, began posting information about other pop-up concerts on social media as they were announced.

Soon we had more than a dozen festival-sized artists ready to perform in some of Las Vegas’ most intimate venues: Armor for Sleep, Hawthorne Heights and Red Jumpsuit Apparatus at the Strat; Horrorpops at the Double Down Saloon. The Wonder Years, La Dispute, Mom Jeans and Sweet Pill at Rockstar Bar; Bring Me the Horizon with Knocked Loose and Landon Barker at the Pearl Theater inside the palm trees; Senses Fail, Anthony Green, Thursday and Bayside at Sand Dollar Downtown, and Kittie at Sand Dollar Lounge.

Megan, 28, traveled from Palm Beach, Florida with her partner and friends for the first day of the festival. The cancellation came like a punch. “Boys Like Girls broke my heart,” she says of the band she most wanted to catch. Standing outside SoulBelly, his chances of catching The All-American Rejects looked slim (the line stretched around the block and into the alleys), but his potential lifted his spirits. “It’s just the bands and the nostalgia. It’s that joy of when you were back in high school and college and chasing that.

Another Megan, 29, from Mobile, Alabama, bought festival tickets for the whole weekend but still hoped to see an intimate set. “This kind of music has been part of my life since I was very young, probably in elementary school,” she says. “It’s always been my mental health soothing thing.”

Meanwhile, the Sand Dollar Lounge on Spring Mountain was packed to the point of a round trip. Marji, 60, from California, stood with her daughter close to her back, bouncing on her tiptoes to try and catch a glimpse of the performance through the pile of dogs that had formed near the bar.

Not all fans took part in the evening’s pop-up shows, but that’s not for lack of effort from people mostly unaffiliated with the festival who did their best to try to help. disappointed fans.

“Next time you want to say the Vegas music scene sucks or nobody cares about shows here, remember today,” Pulsar posted on social media later that night. . “This city and the people who run its venues, manage its technology and book its shows have shown you exactly what they are capable of when the chips are down.”

When the ground finally opened on Day 2, around 60,000 people walked through the doors. Some typical festival outfits were rocked by sheer fabrics, fishnets and multicolored, curly hair extensions. While others leaned into the emo looks of yesteryear: T-shirts from band shows they had seen in their youth, black hoodies, skinny jeans and clothes that proclaimed “Emo’s Not Dead”. Compared to other Vegas festivals like Life Is Beautiful and Electric Daisy Carnival, Gen Z turnout was rare at WWWY, where the crowd alternated between swaying to the beat of the music and moshing in the pit.

There were activations all around the grounds, like a halfpipe for skateboarding, a neon-lit dive bar that festival-goers could drink from, and a larger-than-life art sculpture of a robot rising from the ground.

A work of art spitting out real fire became particularly popular later, when temperatures dropped below 55 degrees. Trust us when we say, as cool as these My Chemical Romance marching band uniforms are, they’re not well insulated.

Our most memorable sets

armor for sleeping (neon tent) Hearing the emotionally charged lyrics of “The Truth About Heaven” and “Remember to Feel Real” brought us back in the best way. Frontman Ben Jorgensen appeared young, rocking a modern edition of the treasured emo fringe of the early years. At one point, he asked who in the crowd had attended the band’s pop-up show at the Strat the night before, and dozens of hands went up, much to his surprise. The Neon Tent itself was a great option for Armor’s hazy emo-pop. The music bounced in and around the structure, enveloping us in a state of returning bliss.

the used (black stage) “Open the circular pit!” asked Bert McCracken, the frontman of The Used. The crowd, including a mosher wearing a full panda costume and head, happily complied with “The Taste of Ink” and “Take It Away.” “Is everyone smiling? The only requirement for a Used concert is that everyone is fucking smiling!” The singer teased. “We like to let everyone vent their anger, depression and anxiety. So, at 3, I want Those who joined raised their middle fingers on “Buried Myself Alive” and “All That I’ve Got.”

Jimmy eat people (pink scene) The title track of Jimmy’s 2004 album Eat World Futures contracts gave the feeling of being in the same place, before, as the crowd underlined the lyrics “I hope better in November” with frontman Jim Adkins. From the same album, “Pain” and “Work” followed. Headbanger “Bleed American” had everyone singing, “Salt, sweat, sugar on the asphalt / Our hearts litter the topsoil.” »

By releasing just one of the band’s new singles, Adkins drew a line between their work then and now. “We’ve spent our entire adult lives making music. We find people all over the world. And it’s part of who we are. … It’s a song about finding yourself in rock ‘n’ roll,” he said before launching into “Something Loud.” Ending on a high note, “The Middle” took us back to the soundtrack of their early 2000s teenage years and several PG-13 films from that era.

Resume on Sunday (black stage) Singer Adam Lazzara wooed the crowd with a Southern accent and energy that rivaled a Texas preacher. “Raise your hand, if you will. Let’s put them together like this,” he said, directing the audience’s movements before launching into “Liar.” The dancing never really stopped, and neither did Lazzara, who remained light and elegant on her feet. The biggest surprise of all came shortly before “Make Damn Sure,” when the singer brought EDM star Steve Aioki onto the stage. Welcome to the fandom, sir.

April Lavigne (black scene) The Canadian singer went to see a recording of her version of Joan Jett’s “Bad Reputation” and opened with “Girlfriend” before browsing hits “Complicated”, “My Happy Ending” and “I’m With You”. Lavigne then welcomed All Time Low on stage for a cover of Blink-182’s “All the Small Things,” which nearly broke the crowd. Capper “Sk8er Boi” provided one of those moments that audiences have been waiting for – to shout out loud, “It was a skater boy / I said see you later boy!” and feel validated for how much they liked this song.

Paramore (pink scene) Hayley Williams performed Brand New Eyes’ hit “All I Wanted” for the very first time. Until then, we had never heard it outside of the studio album, and the fans went crazy. The singer bounced around the stage like she’d written her thesis on stage presence, dropping to her knees and living every moment to the fullest, even in a simple t-shirt in the cold weather. Paramore showered us with nostalgic tracks like “Here We Go Again”, “That’s What You Get” and “Still Into You”. Williams also didn’t hesitate to shut down the show when she noticed a fan in need of help. She also took the time to remind us of how far we’ve come.

“In the early 2000s, when Paramore came on the scene… [it] wasn’t always a safe place to be if you were different. We’ve been around for almost 20 years and I’m tired of letting people, especially older men, tell me what punk rock is,” she said. “They said punk was supposed to be anti-establishment. I can think of nothing more anti-establishment than young women, than people of color and the queer community. So what I want to tell you is that if you are one of those people, there is room for you here now.

My Chemical Romance (black scene) MCR wasted no time knowing what we all wanted to hear for a debut game. ” I’m not well ! the crowd roared to the chorus of, arguably, the most quintessential emo song of all time. After 2012’s “Boy Division”, more than 2004 Three cheers for sweet revenge followed — “Give ‘Em Hell, Kid,” “Helena,” and “The Ghost of You” — with most band members wearing their classic black suits.

Frontman Gerard Way and guitarist Frank Iero had their faces and necks aged with makeup, a play on the When We Were Young concept. And, joking that he forgot where he was, Way addressed the Las Vegas crowd as “Utah” before “The Ghost of You.”

The black parade the aesthetic was strong, with crumbling buildings and post-war rubble on stage, seen when the world-touring band performed at T-Mobile Arena a few days ago. “The Black Parade”, “Teenagers” and “Famous Last Words” took us all the way. “Vampires Will Never Hurt You” and “Vampire Money” cut deep for the encore.