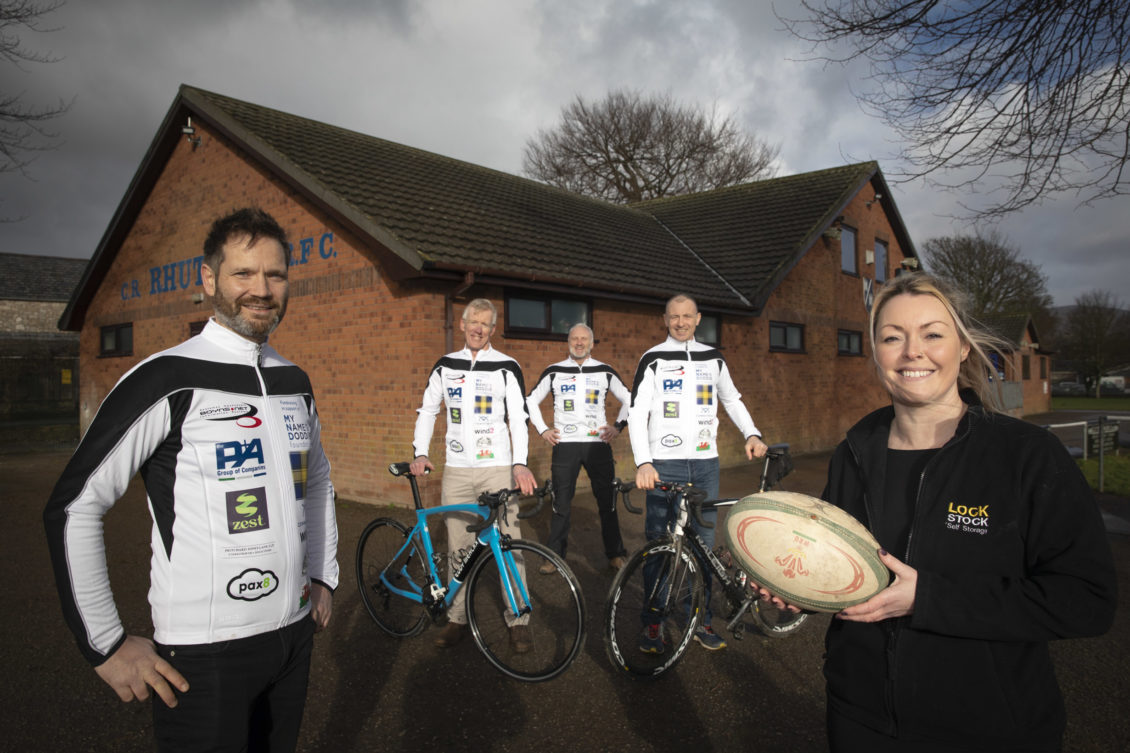 The rugby club team on their bikes to raise £25,000 for Scottish star Doddie’s charity

The four Ruthin Rugby Club riders will cycle from Murrayfield to the Principality Stadium in Cardiff for the Wales v Scotland Doddie Weir Cup game.

They will join rugby legends Shane Williams, Wales top try scorer, England’s Mike Teague and Scot Rob Wainwright as well as cycling stars Sir Chris Hoy and Mark Beaumont in a bid to deliver the ball match for the kick-off at 2:15 p.m. on Saturday. 12 February.

The two-day, 50-hour relay race is for former Scottish second-tier giant Doddie Weir’s grassroots campaign to raise money for research into the motor neurone disease that affects him and so many others. others across the UK.

The cycle cavalcade will make an hour-long stop in Ruthin around 7.30am on Friday morning, then head towards Dolgellau with stops at Ysgol Y Berwyn, Bala and Ysgol OM Edwards, Llanwchllyn on the way.

So far the rugby club team of Dr Matt Davies, former first teammates Steve Morgan and Rob Boyns and Caernarfon’s Wyn Jones have raised over £22,000 for the My Name’5 Doddie Foundation which aims to rid the world of MND.

They hope local children will be there at Ruthin Rugby Club to greet the riders and for autographs and that local cyclists will join them on the ride to Corwen.

Matt Davies, from Llanynys, near Ruthin, GP at Middle Lane Surgery in Denbigh, said: ‘The journey starts at Murrayfield Stadium in Edinburgh and we are supported by a number of local businesses including Lock Stock Self Storage for what is going to be quite a grueling ride.

“It’s 500 miles through the cold and dark February but it’s rugby and cycling, two of my favorite things so when Rob and Steve suggested it we decided to go and it there is no better example than Doddie Weir.

“We’ve been training a lot, we’re on our bikes several times a week and we’ve had a fantastic response from our sponsors who have already committed over £11,000 to us.

“There are 22 teams leaving Murrayfield on Thursday morning, driving in relays, and we are calling rugby clubs along the way, including in Ruthin for an hour which we expect to reach around 7.30am on Friday morning.

“It’ll be a steady pace to go – an average speed of around 15mph is pretty punchy in the winter, but we have a support crew with us and Steve and Rob have been on Iron Man events and I’ve been on some rides long distance. .

“We are also encouraged that the team that collects the most can take to the field before the big game and we also hope that some of our friends from Ruthin Cycling Club will join us for a few kilometers on Friday. ”

The team will be supported by a van driven by John Vaughn and Neil Colquhoun so they can rest between driving laps and transport food and drink, equipment and spare parts.

Lisa James of Lock Stock said: “It’s a fantastic effort from Matt and his friends. They have raised a phenomenal amount of money and it would be great to see them on the pitch in Cardiff before kick-off.

“We are delighted to be able to support them in what will be an incredible effort for the benefit of a fantastic charity and I’m sure they will get a great start that morning in Ruthin.”

Ruthin’s team leader Rob Boyns said: “We were hoping to raise £1,000 but we’ve had an amazing response with over 100 people donating and we want to say a big thank you to them all.

“It’s going to be a tough challenge with over 8,000 meters of elevation gain, but we’re doing it as a relay and we’re really looking forward to it and engaging with people along the way, especially locally, that’s why we stop for an hour at the schools of Bala and Llanwchllyn.

“There will be some famous faces among the riders, including a heavyweight squad made up of former Welsh strikers Alix Popham, Colin Charvis, Tony Copsey and Ian Gough.”

Another is Dr Rob Wainwright, a Scotland and British Lions striker, who said: “We were all inspired by Doddie and his fight against MND to cycle for two days on cold, dark winter roads to raise funds for his My Name’5 Doddie Foundation.

“We will all be adorned in the Doddie tartan and are looking for support for our cause as we travel.

“All the money will go directly to the MN5D Foundation which has invested £6.5million in MND research over the past 4 years and we hope a breakthrough treatment will be imminent, in time for Doddie and the countless future victims of MND.”

To donate to Matt, Rob, Steve and Wyn and for more information on their challenge, go to www.justgiving.com/fundraising/DoddieGog500