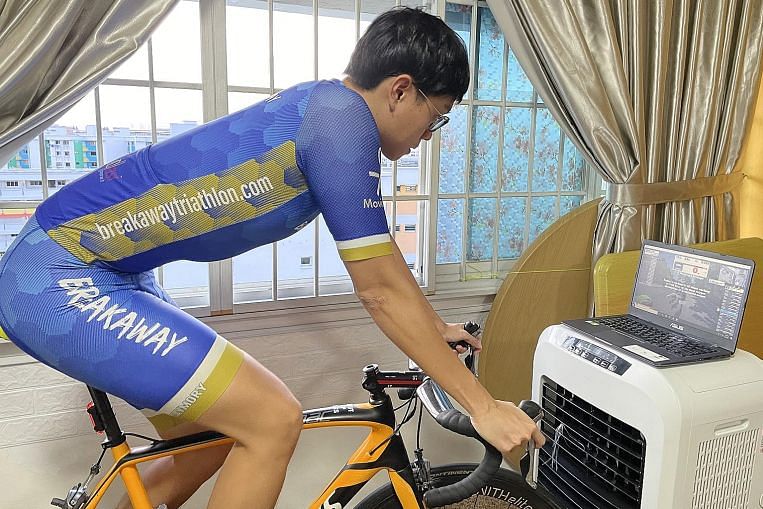 The hybrid approach allows the triathlon club to adapt


Hybrid fitness training programs are now commonplace in the days of Covid-19, but when the Breakaway Triathlon Club began offering such services in 2018, co-founders Eugene Lee, Aw Yizhong and Jacob Low recall at how lukewarm the reception was at best.

Only half of the club’s members then signed up because most felt sessions needed to be in person, said Lee, 43. “But with the pandemic, it has accelerated the growth of this strategy for us.”

After last year’s two-month breaker, Breakaway has seen its local customer base triple, while overseas membership has remained stable during this time.

The company, which opened its first physical facility in Henderson Road last month, has around 60 Singapore-based members and 400 international members. Fees start at $ 150 per month, and the rates for the Hybrid program are the same as in-person.

Lee said, “The technology we are using is not a new artificial intelligence or invention, the software already exists.

“Digital disruption is a strategy, it’s not just about using a particular software, so the business and the approach must have a direction and must implement the technology to adapt to that direction.”

Members now have access to onsite and remote training sessions through Breakaway’s virtual platform and data metrics which are partly funded by Sport Singapore as part of the ‘Blended’ initiative of the national agency.

The pilot project, which saw its first round run from October to April last year, was set up to encourage event management companies and organizers, as well as academies and private clubs, to embrace digitization as basic strategy. Approved projects receive up to $ 30,000 (level 2) or $ 50,000 (level 1) in grants. One area that Breakaway has focused on is making the onboarding process seamless.

For example, when someone signs up for the club now, they will receive an automated email with a video that will teach them how to log into the TrainingPeaks platform, which Breakaway uses to plan training programs and monitor training. athlete performance.

Each athlete’s training program is provided on the TrainingPeaks software and the data and measurements recorded on their smartwatches from their runs, swims and bike rides are transferred to the platform for coaches to review and add. informations.

Virtual cycling sessions are performed on Zwift, a virtual home cycling training app in which an athlete’s pedaling trains an avatar around a virtual course.

To maintain the social element of a workout, athletes and coaches communicate using the Discord video game chat app.

Recognizing that it was a difficult time for those in the sports and fitness industry, Lee stressed the importance of thinking outside the box and innovating to meet challenges while seizing opportunities wherever possible. .

He said, “The reality is, what do we have to do as an industry to pivot? Everyone is on the same level because over the last century nothing like this has ever happened.

“Now the goal is to incorporate this new approach when Phase 2 (Heightened Alert) ends and the country begins to reopen (when less stringent measures are in place) and reach the region.”

Meeting with Johan Museeuw, the greatest Classics rider of his generation