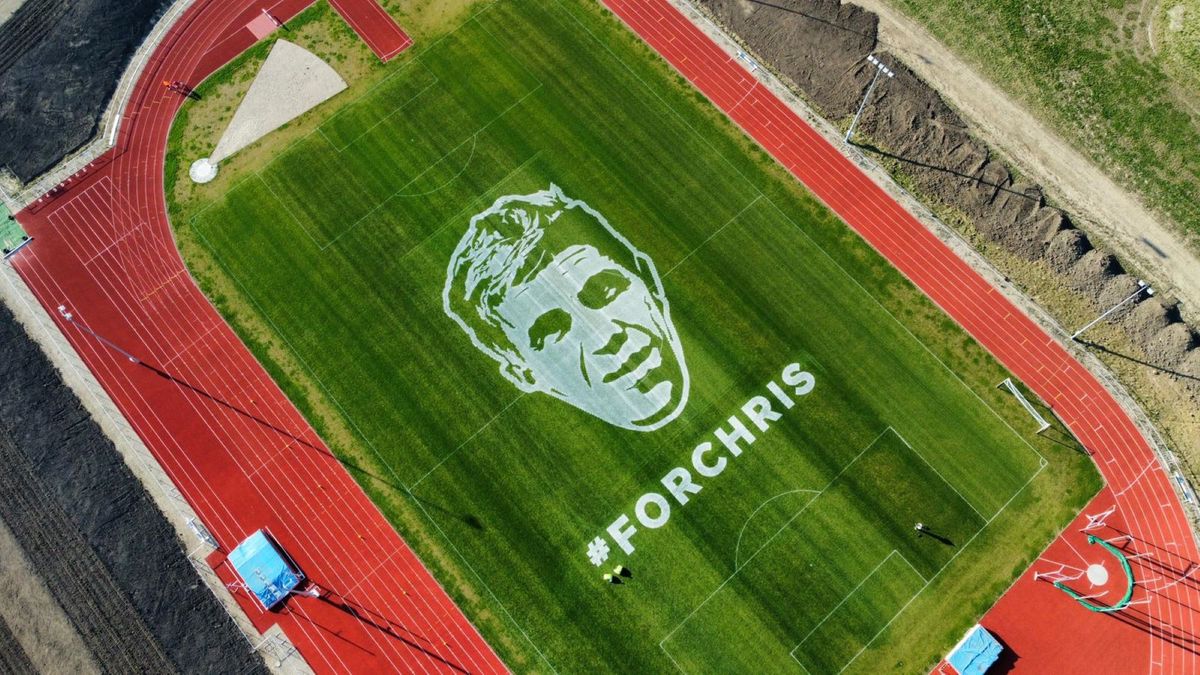 The 40m-tall face of ‘a friend I never met’: how two fans pay tribute to the late Chris Anker Sørensen

Kasper Birkeholm Munk and Kim Sivert Jensen painted the portrait using robots on a football pitch in time for the second stage of the Tour de France.

Part of the #ForChris project, which was set up by the duo, the mural in Holbæk will be passed by the peloton as they charge towards the finish of stage two in Nyborg.

After working on their project for months, Birkeholm Munk knows seeing the painting on television will give everyone goosebumps.

“I know Holbaek explained to ASO and French television that this was their main site in the city. I’m 99.9% sure we’ll get the pictures and I know there’s information about the site in the commentary book. I know we’ll all be sitting with goosebumps when we see it. It’s really crazy. I never imagined that when we first had this idea, something like this would happen. What a ride!” Birkeholm Munk told Cycling Weekly.

Former professional Chris Anker Sørensen was killed after being hit by a driver on a ride on the eve of the World Championships in Flanders last year. The idea for the artwork came to the two friends after hearing about the incident and feeling they had to do something to show their support.

Birkeholm Munk and Sivert Jensen felt that Anker Sørensen exhibited qualities they could both identify with.

“He represented a lot of very human qualities, empathetic values ​​that very much reflect the person I’m trying to be. That’s how I always felt connected to him. He [Anker Sørensen] was a friend I never met. In Denmark it had a fantastic appeal for cyclists but also for the common man in the street. said Birkeholm Munk.

The couple initially set up a fundraising campaign for Sørensen’s family and two charity projects that help bereaved people. But it was important to them that it wasn’t just about the money, they wanted to create a way to connect cycling fans and keep the memory of the former Danish professional alive.

The friends produced t-shirts and sweaters which they gave away to everyone who donated.

“Developing graphic design was creating a movement. To be able to see it and know that you have donated or that others have donated to our fund. It has become a way of showing that you support our charity movement,” said Birkeholm Munk.

“We’ve sent almost 5,000 t-shirts and sweatshirts with the graphic and they’re creating conversations about Chris Anker and cycling. It means that people talk to each other. They look up from their phone and see the picture and instantly say hello and talk about cycling and the project. he added.

As the Tour de France was due to arrive in Denmark on Friday, the two friends worked with a team of designers and collaborators to have their t-shirt graphics painted on a local football pitch in Holbaek.

“We had to quickly think of a space for it. We know that there is rarely aerial footage of the starting town, so we needed to find a place with the best possible access where people could see it from above. We needed a stage where the peloton had settled in and maybe there was a breakaway for the aerial cameras to move around a bit. said Birkeholm Munk.

“Holbaek has a group preparing for the Tour. We approached the director with our idea and he loved it. We went a month and a half ago to try out the prototype of this idea to see if it would work. You should have seen the painters jumping all over the field after nine hours of painting. They were thrilled!” he added.

The key for the friends was to maintain the legacy of Chris Anker Sørensen. When the second stage of the Tour de France ends in Nyborg on Saturday evening, we can say that it will be mission accomplished.

How bike parking pods could improve America’s cities for cyclists