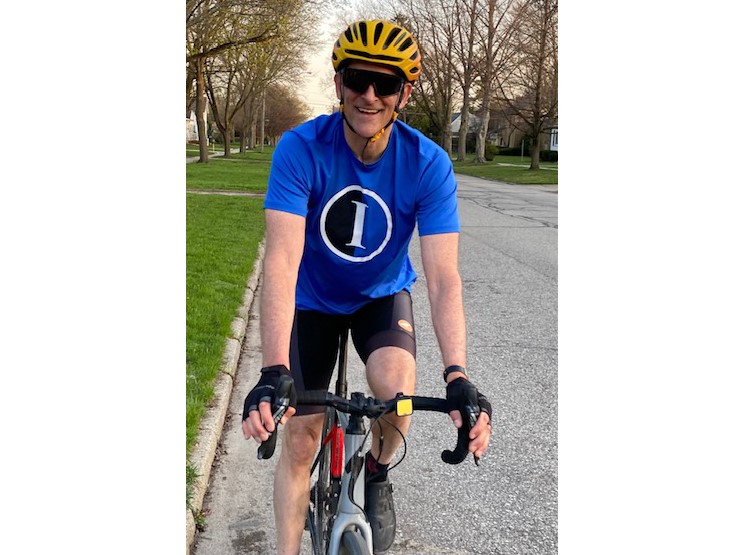 Steve Scott of Ieuter Insurance Group plans to pedal hard as he joins the Wish-A-Mile Bicycle Tour, a 300-mile cycling circuit from Traverse City to Marshall.

The 35th annual Wish-A-Mile Bike Ride, which runs July 28-31, is the largest fundraising event for the Michigan chapter, started in 1987 with four friends who challenged themselves to ride 300 miles from Canton to Mackinac. Affectionately known as WAM, this event has continued to grow from those humble beginnings into an incredible, heartwarming journey of dedicated riders and volunteers who are granting transformational wishes for Michigan children struggling with life-threatening illnesses.


“I wish the kids were some of the bravest, kindest kids you know,” Scott said. “I ride and raise funds so Michigan’s most deserving children and their families can experience the happiness, relief, and renewal that a wish can bring.”

Scott said a friend’s participation in the Wish-A-Mile program inspired him to start working out. The longest ride he had done before training for this event was a two-day, 200-mile bike trip from Seattle to Portland.

“It was 120 miles the first day and 80 the second,” Scott said. “A friend and I spent the night in a gym with 100 other guys and it was miserable. Never again!”

This time around, he’s enjoying the fully catered options provided by the Make-A-Wish team, which offers full meals, aid stations, doctors and massage therapists along the route, and can carry gear for cyclists so that they can ride without hindrance. .

The 300-mile route Scott will take runs from Traverse City to Big Rapids on Day 1, Big Rapids to Grand Ledge on Day 2, and Grand Ledge to Marshall on Day 3. There are also shorter routes, including a 50- one kilometer trip.

Scott said he is thrilled to work for a company so committed to supporting the community and encourages staff members to engage in volunteer efforts. Not only did his teammates at Ieuter Insurance Group pledge their support, but their partners at Michigan Insurance donated $1,000 in Scott’s name.

“We’re lucky,” Scott said. “We live in a great community and the community supports us, and it’s important to give back. It’s hard to find a better cause than Make-A-Wish. It’s something you can really support.

Those who want to support the cause and support Scott’s run as a sponsor can visit makeawishmichigan.donordrive.com/participant/Steve-Scott. As of July 8, Scott’s supporters had pledged nearly $2,400 and more than $1,145,605 had been raised from all Michigan runners.

The Signs of the Tour de France