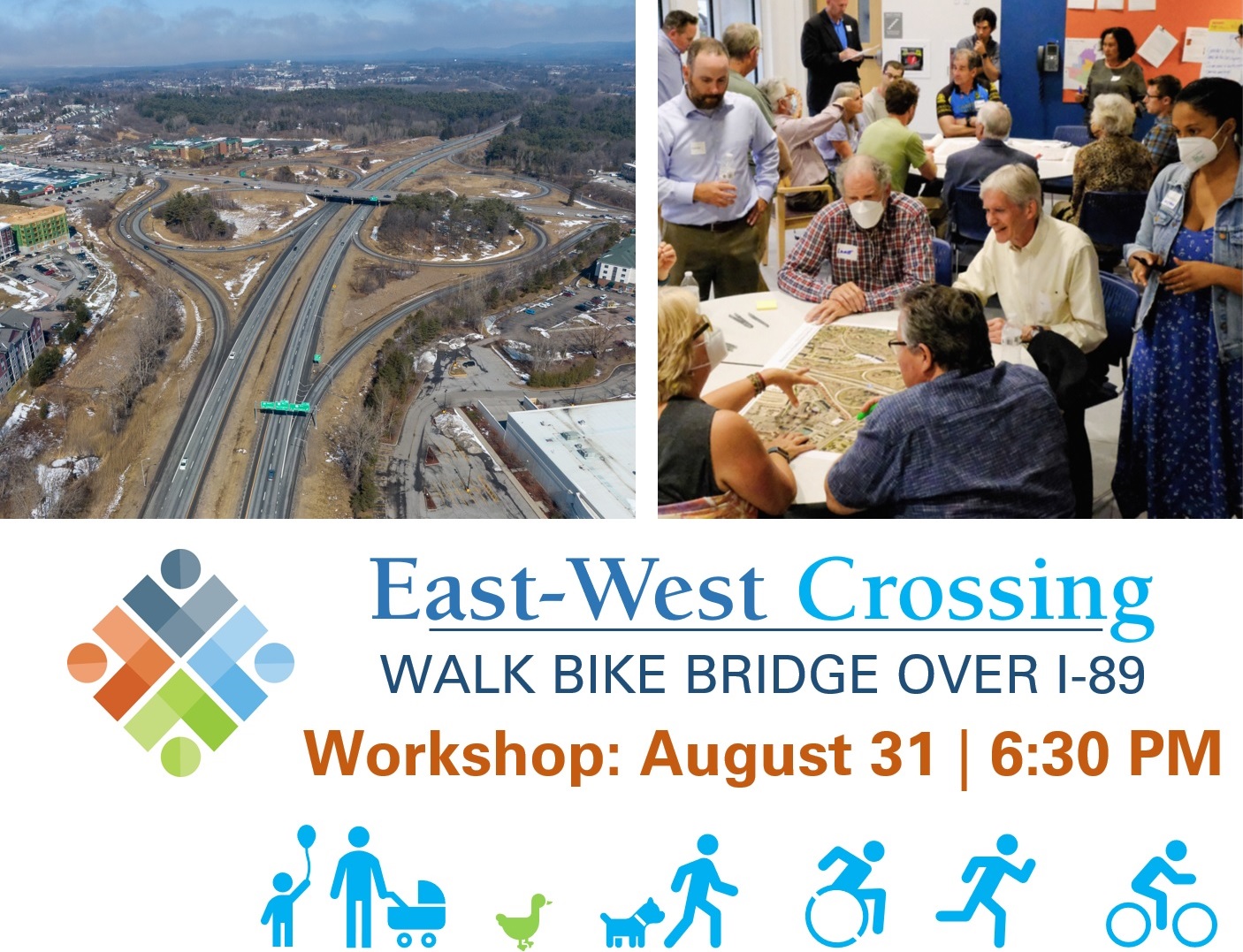 The City of South Burlington will host a public workshop on the proposed East-West Crossing – a bicycle-only pedestrian bridge over I-89 at Exit 14 – on August 31 at 6:30 p.m. The East-West Crossing Workshop 2 , to be held at South Burlington City Hall at 180 Market Street, is the second in a series of three public workshops. These workshops will culminate in a design concept for the East-West Crossing project, which is scheduled for construction in 2025. Doors (and a virtual room) open at 5:30 p.m. for a preliminary preview of potential concepts and a light lunch before the 6th: 30 hour workshop.
The City, in partnership with the Vermont Agency of Transportation and the Vermont Division of the Federal Highway Administration, has hired a multidisciplinary design team that will present three competing concepts based on feedback received during the first workshop. The public is invited to this workshop to review the options and provide advice on what should be included in the draft final concept. The final concept draft will be presented to the public in October during the final workshop.
In June, the East-West Crossing design team held the first workshop to hear from the public. The City and the public commissioned the design team to develop a structure that was both iconic and fundamentally functional. Taking into account public feedback from the first workshop, the design team worked on three alternative concepts: a land bridge, a “Vermonty” bridge and a modern bridge, all of which will be presented in workshop 2. the bridge follows the city’s preferred alignment, which begins on Williston Road, runs along the south side of the cloverleaf interchange at Exit 14 and may have branches to Quarry Hill and the University Shopping Centre.
The bridge, located in South Burlington, removes a major regional barrier to walking and cycling between Burlington and South Burlington and expands access to the many employment, housing and retail opportunities in both cities. In 2021, the South Burlington received a $9.77 million RAISE grant from the federal government to move the East-West Crossing project from planning to construction. These funds must be supplemented by funding from the TIF district.
Additional information about the project, including virtual and telephone workshop options, can be found online at www.southburlingtonvt.gov.
###

VTDigger press releases are provided by the submitting organizations and may include mention of VTDigger staff, family and directors.

Use our self-service press release portal to promote it on VTDigger and reach our entire web and email readership.