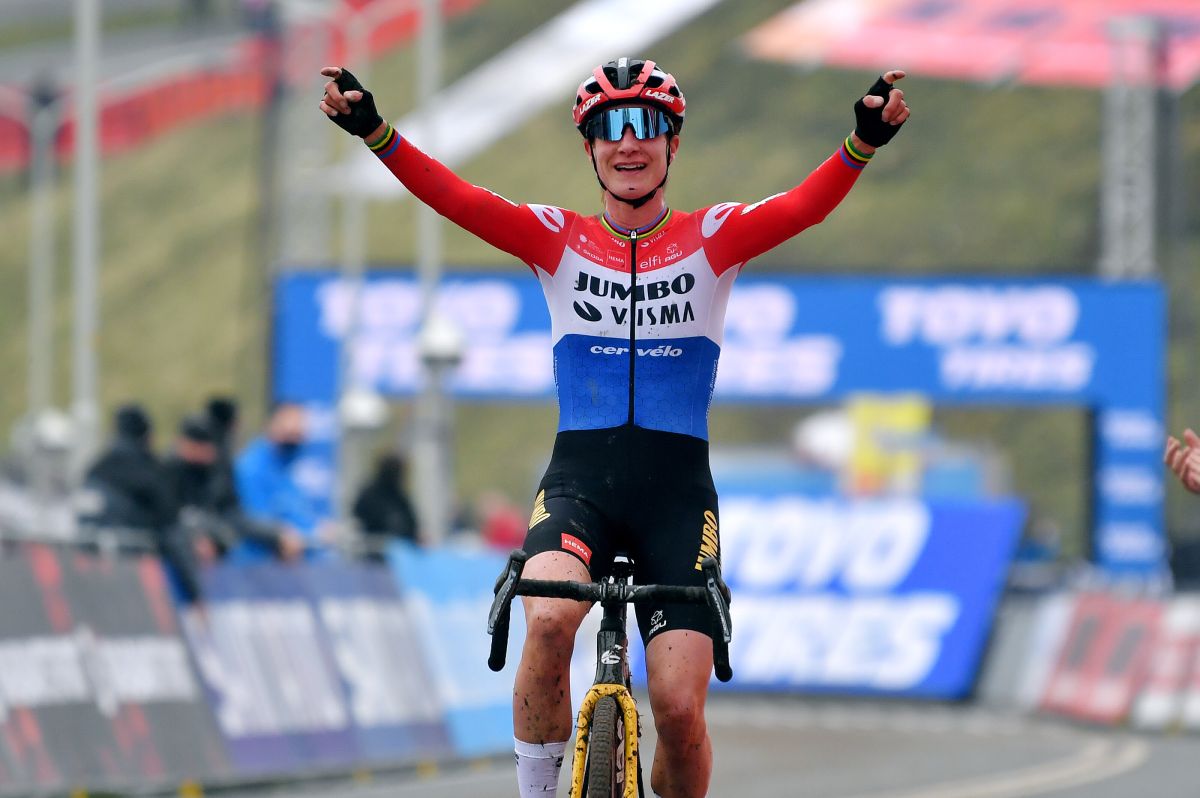 Marianne Vos (Team Jumbo–Visma) dealt a psychological blow to her rivals as she charged flawlessly to win the final round of the Cyclo-Cross World Cup in Hoogerheide.

Already winner of the Dutch national title earlier this month, Vos launched a blistering attack on the last lap to win just six days before the UCI Cyclo-cross World Championships in Fayetteville.

Hoogerheide is hosting next year’s world championships and the competitors followed a similar course as in America next weekend.

Reigning world champion Lucinda Brand (Baloise Trek Lions) had tried to pull away from her rivals on the penultimate lap, but Vos and leader Puck Pieterse (Alpecin – Fenix) responded.

With Brand suffering from his attack in the previous round, Vos made the decision to pull off a clear win.

Brand, who had already won the World Cup overall, sprinted past Under-23 rider Pieterse to take second place, 10 seconds behind Vos.

Vos has combined cyclo-cross racing with her road training this season and is competing at the World Championships having won five out of nine crossover starts this winter.

“I am, of course, very happy to win and I’m very happy with the feeling during the race,” Vos said.

“We also know that it doesn’t say much about next week, of course it’s good to go to America with good form, but next week is a new race for everyone.

Vos launched his winning attack on a short bank section on soft ground, running away and leaving Pieterse and Brand behind.

“During the race I felt I had good traction and I knew when I wanted to break away on the last lap there was a chance to go for it,” added Vos. “When I had a gap, I went flat out to the finish.”

When asked if Vos was her biggest challenger for next weekend’s world title, Brand replied, “Yeah, she showed it today. She is very experienced, she showed her great form again today and she is ready for next week.

Brand had already won the World Cup series before the final in Hoogerheide. Here Brand again faced Vos, who had beaten her to the Dutch national title in her last outing.

The traditional Hoogerheide round of the Cyclo-Cross World Cup again challenged riders with a mix of steep banks, technical features and steep stairs.

Covid-19 restrictions prevented fans from attending the Hoogerheide round, which was canceled last season due to the pandemic.

Brand found herself eighth through the first corners after being overwhelmed on the fast road start.

A large leading group of 11 riders gathered on the first lap as the competitors snaked between the fields with Blanka Kata Vas (Team SD Worx) dictating the pace.

After being narrowly beaten to second place in Flamanville, Under-23 series leader Puck Pieterse (Alpecin – Fenix) was next to force the pace but was closely watched by Brand, Vos and Van Empel (Pauwels Sauzen – Bingoal).

Reigning world champion Brand showed her power on the grassy climbs and the leading quartet began to pull away from the chasers.

Crossing the finish, Pieterse launched another attack using the wake of her rivals but the leaders were quick to react.

Rivals for next weekend’s world championships, Brand and Vos began trading blows, with Pieterse also battling with his older compatriots.

Vas was also in the battle for the podium and pulled out the top three with Van Empel, to make it five leaders with three laps to go.

As Pieterse set the pace, the World and European champion marque looked under pressure, while Vos looked comfortable in second place.

On the finish straight, Brand came from the back to the front of the lead group and attacked through the wooded section.

Brand had won the last two races held at Hoogerheide and sped up the climbs, with only Vos able to respond as Pieterse and Van Empel were left behind.

Although he was initially ruled out, the bunny Pieterse jumped the hurdles to make up for the slim deficit in the leaders.

At the bell, Pieterse led the leading trio while Van Empel was seven seconds behind.

Brand suffered from her efforts in the previous lap and she was left behind as Pieterse forced the pace on the wooded part.

Just as Brand came back to the leaders, Vos launched a blistering attack without any of her rivals being able to respond. Brand fell back on Pieterse and beat the 20-year-old in the uphill sprint to take second place.