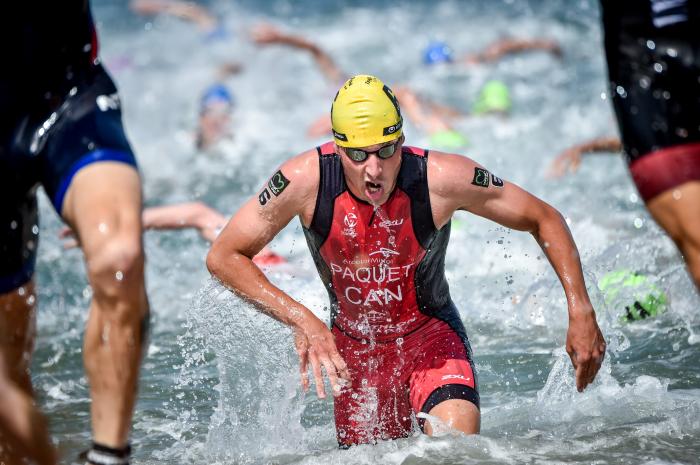 Is the Rouge et Or du Québec the best triathlon club in the country?

Mention the Rouge et Or, and most sports fans will think football. With 10 Vanier Cup titles to its credit since its debut in 1996, the Université Laval team is the most successful university football team in Canada.

The Rouge et Or is the emblematic name of all the sports teams that train at the PEPS, the physical education and sports pavilion on the university’s vast campus in Quebec City. This includes the Rouge et Or triathlon club which is quietly training some of the most promising triathletes in Canada.

Think of Alexis Lepage, who made his Olympic debut at Tokyo 2020 in the first mixed team relay. Think of Charles Paquet, who in 2016 finished second at the world junior championships in Cozumel. Now 24 and studying business administration at ULaval, Paquet established himself as one of Canada’s most promising triathletes on the international circuit last year, placing sixth in Karlovy Vary in the Czech Republic and seventh a week later in Hamburg, Germany, followed in late October by a silver medal at the Americas Cup in St. George, Utah. This year, Paquet finished fourth at the Sarasota-Bradenton Americas Triathlon Cup and 17th at the Arzachena Triathlon World Cup.

“It feels so good to have done such good races after the pandemic and to have trained alone all winter,” said Paquet, by the PEPS pool just days before his departure for Utah. last October. As a top athlete, Paquet had been allowed access to the pool during the worst days of Covid, but staying focused on his goals had been difficult. “There were no races and I had no idea where I was going. I just tried to train, hoping that one day it would pay off.

When Covid restrictions were eased last fall, it was hard to imagine Paquet swimming lap after lap alone in his lane, no coach on deck and no one in the lane beside him. That Saturday, there were 18 junior and elite athletes in the water, while a group of development athletes, in masks, warmed up on the sidelines as they waited for their training session to begin. The head coach of the Rouge et Or, Pierre-Yves Gigou, as well as the assistant coach Nicolas Proulx-Bé, surveyed the bridge. In the leftmost lanes, junior triathletes Léo Roy and Mathis Beaulieu went head-to-head. Roy and Beaulieu are among the best junior triathletes in Canada, and that weekend they were preparing for the world junior championships in Quarteira, Portugal, where they would face off. Until Roy came out of the junior class this year, he and Beaulieu were rivals in every race, but also close friends. There’s an atmosphere here that’s really, really great,” said Roy, who moved to Quebec City in September to train. with the Rouge et Or de Gigou after a few years of working with Amélie Kretz at her home base in Montreal. “Everyone helps each other. We all improve together, as a team. I really like that.”

Roy’s sentiments are echoed by Noèmie Beaulieu (no relation to Mathis), another junior triathlete who burst onto the international scene last year with a seventh-place finish at the Junior European Cup in Banyoles, Spain. Spain. She surpassed that at the end of the season with a gold medal at the Triathlon of the Americas Championships in St. George. The 18-year-old from Gatineau moved to Quebec in 2020 to attend Collège Garneau, a junior college with a sports-study program that allows high-level athletes to adapt their class schedule according to their training.

“I really needed to find a group to train with at my level, and I knew it was here, in Quebec,” she said. “Everyone is really motivated. It’s cool.”

It helps that ULaval’s PEPS Sports Center offers the best facilities in Eastern Canada, all under one roof, with an airy, separate gymnasium where top athletes do their weight training and access to top-level kinesiologists, nutritionists and sports therapists. Not far away is a new 500m indoor race track – essentially the outer ring of Quebec’s new speed skating oval – and during the summer cycling season the hills and good pavement are just a stone’s throw away. short bike ride from campus.

“It would be great to make it a national training center, like they did in Victoria, to have a center on both ends of the country,” Roy muses. “I think that would be really great because we have such a great group of athletes to build on here.”

It’s a case Gigou has heard others make, and it’s tempting to dream of getting the kind of government funding it would take to turn the Rouge et Or club into a kind of Victoria East, but Gigou fears that turning this dream into reality would come at a high cost, both for the high performance athletes and for the recreational athletes who are an integral part of the club.

“As soon as you accept money from an agency like Own the Podium, it all comes down to how your best athletes perform, and in triathlon that means the last three or four years of an athlete’s career,” Gigou said. work on the development of an athlete over 10 or 12 years, in the perspective of his best years. You can’t put pressure on them to perform right away.

Gigou, originally from France, proved himself as a long-distance triathlete at a young age: he finished four times in Kona in his mid-twenties. He left a coaching job in Sherbrooke to become head coach of the Rouge et Or in 2016, when he was just 29 years old.

“When I arrived here, there were already very talented athletes, like Alexis Lepage, who had just returned from two years at the national training center in Australia, and Charles Paquet had just become the first Canadian male to step onto the podium at a junior world championship. So as a coach it was a dream job. But my mandate was not just to coach elite athletes, it was to build the club at all levels, for everyone from recreational athletes to age groups.

In 2017, Gigou and his staff launched the Rouge et Or mini-triathlete program, taking a fleet of small-sized bikes to area elementary schools and summer day camps, featuring athletes like Lepage and l Rio 2016 Olympian Sarah-Anne Brault sharing her experiences with elementary school children and leading them through a training session. For enthusiasts, there is a “triathlon school” all year round, for children aged 8 to 13, and a five-week triathlon day camp in the summer. From the age of 13 or 14, the most enthusiastic and promising triathletes are directed to the sports-studies program offered by three different high schools in the region associated with the Rouge et Or. Then there is the sports program -College Garneau studies for older students, varsity team, elite and junior teams – not to mention recreational triathletes. “The TriPeux” – a pun describing those who train for fun, but “, or very few – are those who get some exercise, while there is a separate program for age groups more competitive vying for spots at the Kona World or World Triathlon Championships.

The club has 10 employees, including three full-time coaches. Since there is no official college triathlon circuit, like there is for swimming, soccer, or other sports, no real funding comes directly from the university. The vast majority of the budget comes from the contributions of the 260 athletes who make up the Rouge et Or each year.

“We have to finance ourselves,” says Gigou. “Our members pay to use the university sports center. We pay, yes, but I must say that we have excellent access to one of the finest sports facilities in Canada.

For college students like Paquet and Lepage, having a base on campus means it’s easy to juggle their training schedule with their college class schedule. And Gigou, who holds a master’s degree in exercise physiology from the University of Sherbrooke, pushes his athletes to perform well academically, regardless of their goals.

“For me, it’s a pride to know that at the end of my athletes’ triathlon careers, they will have a diploma in their pocket and a kind of other career choice awaits them,” he says. “I believe that work-life balance is essential.”

It’s an approach that clearly works, based on easy camaraderie between club members at all levels.

“It’s fun. It’s not too bad. I like being in contact with people in the age group, it’s just more real,” said Paquet at the end of a quick swimming training session. 3,400 meters.

“What I like is the spirit of the group, says Édouard Tétrault, a 20-year-old who moved from Drummondville to go to school in Quebec to train with the Rouge et Or. We all push each other. We all try to perform, but we do it together.

Loreen Pindera writes “The Age Group Mind” column for Triathlon Canada Review. This story appeared in the May 2022 issue of the magazine.