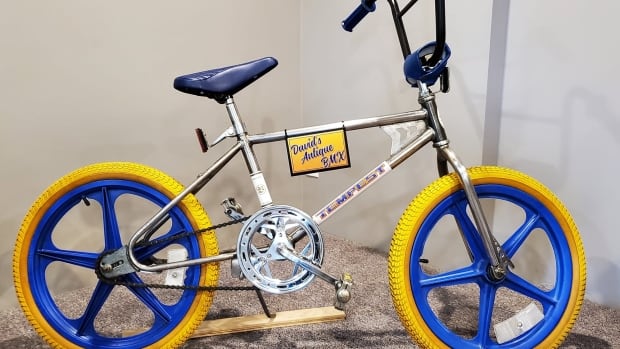 It was a gift from the heart the first time; now, a BMX bike that has been painstakingly restored is a gift to Darryl Pike’s wounded heart.

Pike bought the bike for his little brother, David, just a few years before the boy was killed in an avalanche in 1986 aged 15.

The bike has sat unused and deteriorating in the basement of the family home for most of the years since the tragic death.

But after their mother died last year and the house was cleaned up, Pike said he realized he just couldn’t part with the rusty old bike and decided to restore it instead.

“From the moment I started doing it, I said, ‘I just want it back, David, just for you, just something in your memory,'” he said.

Darryl Pike was nine years older than David, and he had been in the workforce and was temporarily out of work.

He remembers young David seeing a BMX bike in a Sears catalog and really wanted one, but it was an indulgence his parents couldn’t afford at the time.

So Pike decided to spend his unemployment insurance check at the Hudson’s Bay Company in Corner Brook to buy the bike for about $180 and surprise his brother.

“The look on his face at the time, it was well worth that unemployment check, that’s all I can tell you,” Pike said.

Pike said his brother spent many hours riding his BMX bike, and people who grew up in the same neighborhood still remember seeing him on it.

“He totally lived it, from daylight to dark,” Pike said. “He certainly rode it a lot and liked it a lot, I know that.”

Unfortunately, Pike only has memories of his younger brother after David is killed in an avalanche in the Curling area of ​​Corner Brook. David and a friend had jumped from an area known as Monument Hill when a large amount of heavy snow fell on David and he was unable to escape.

“You never get over it. You just can’t,” Pike said. “My mom and my dad, I know it destroyed them for a long, long time.”

Too precious to throw away

Pike’s mother kept many of her deceased son’s belongings stored in the basement, including the beloved BMX.

Even when she hit her 80s, the family couldn’t convince her to leave the family home, and Pike said he was sure it was because it held so many memories of the deceased son.

After Pike’s mother passed away last year, he still couldn’t bring himself to get rid of the bike.

Pike said he decided to restore the bike to as close to original condition as possible.

But he had his work cut out for him, as the bike was in disrepair, with rusty metal, discolored plastic rims and flat tires.

Pike, who retired from his career as a carpenter at Western Health, estimates that it took him around 200 hours of sanding, scrubbing and finding parts to restore the bike.

But he now has it in good condition and in full working order.

But Pike doesn’t expect anyone to ride a bike with his little brother.

He said he worked too hard to refurbish it to get it dirty again, so he plans to put it on display in his house or cabin instead.

For now, it’s in a corner of his playroom, just below his late brother’s last school photo, as if David is watching over his old pride and joy again.

“I think it’s a fitting place, and it makes me feel good that the project is finally finished. And I can say that I put something there for him, in his memory,” Pike said.