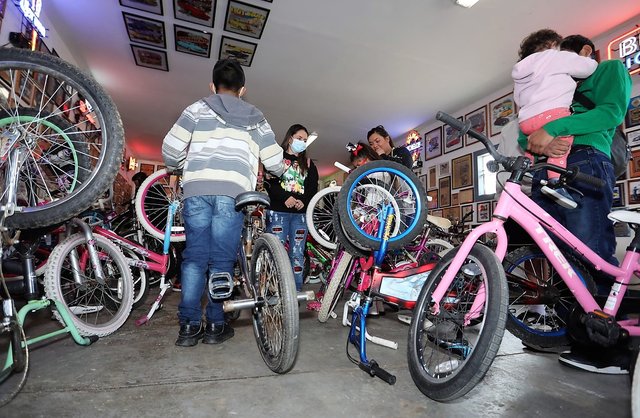 It’s his non-profit organization that has been collecting second-hand bikes, refurbishing them to donate to foster families and children in need during the holidays since 2018.

“I can’t keep funding it,” he recently told Paulsen.

In December, 189 bikes were given out from his French Camp ranch during the giveaway.

He hopes to do it again.

Not too long ago, Paulsen sent out letters to companies and also looked at grants looking for funding.

His friends recently posted on Facebook, providing a link to the Bikes for Kids social media page on Paulsen seeking donations from the public.

Among the recent posts included:

“Unfortunately, while trying to run her non-profit, Mr Paulsen’s wife suffered a stroke (her second in just a few years), causing her to fall and injure herself, leaving her bedridden since.

“This kept Mr. Paulsen from doing anything for Bikes for Kids or his wheel business for months as he had to tend to the needs of his wife Patricia.”

There have also been much-needed repairs to the Paulsen home, from fixing fences to bigger things like replacing windows and rebuilding stairs so that home nurses can tend to Pete Paulsen’s wife.

His business, moreover, took a hit during the pandemic, forcing Paulsen to retire after 60 years.

Along the way, he lost several of his Bike for Kids sponsors.

“In the past few months alone, Mr. Paulsen has hosted two events in hopes of raising money for Bikes for Kids. Unfortunately, neither event raised much money, in fact one event actually caused him to lose money,” his friend said.

Paulsen is still trying to find homes for his donated bikes. He expressed appreciation to some of his helping hands early on, including John Anderson of Anderson’s Bike & Mowers.

A, GoFundMe, Venmo and Pay Pal accounts have been set up on Paulsen’s Facebook page for those looking to help.

Plus, he just announced another hot rod party planned for this year.