What do cycling and hip-hop have in common? State Bicycles and the Wu-Tang Clan.

State’s latest collaboration with one of the world’s most popular hip-hop groups has resulted in three new bikes. For trendy city dwellers and fans of retro mountain bikes. These Wu-Tang Clan edition bikes come with optional bottle openers. Practical, when you need to party after a ride. (Photo: State Bicycle Co)

When you wanna hip-hop on gravel

The first of State’s new Wu-Tang Clan bikes is the Klunker. With a steel frame, stiff fork, raised handlebars and coaster brakes, the Wu-Tang Killer Bee Klunker is best suited for cruising a boardwalk rather than single-track trails.

As cycling historians know, the first mountain bikes were called Klunkers, by their users. And State tried to stay true to the look of those 1970s bikes, with curved tubing and an absence of modern brake technology. If big tires aren’t your thing, there’s the Wu-Tang Core Line. It is a classic urban cruiser made from steel tubing.

Unlike the Klunker, State’s product planners know that riders on a Wu-Tang Core Line will move at high speed in high density urban areas. To make the bike safe enough in traffic, it is equipped with rim brakes.

The Wu-Tang Core Line has a dominant black colorway, contrasted by yellow hubs and subtle graphics. 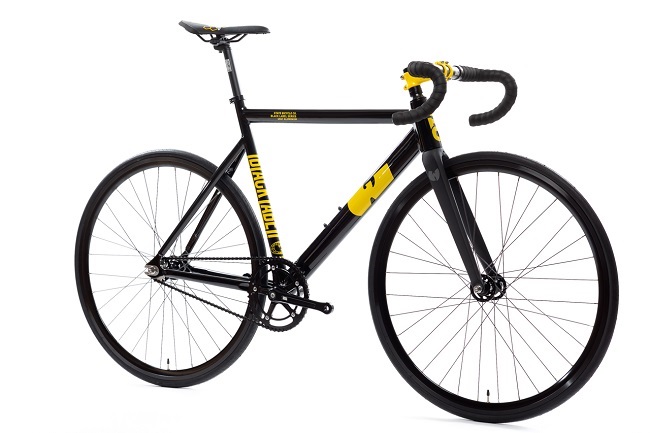 Bigger tubes, aluminum, but a light fork. This is for Wu-Tang Clan fans who want to go fast. (Photo: State Bicycle Co)

Need more speed? Then consider the Wu-Tang 6061 Black Label. This bike may look like State’s Wu-Tang Core Line overall, but its tubing is aluminum instead of steel. And the fork is carbon fiber.

By not using steel in the construction of the Core Line, State creates a very light urban bike that rolls with great efficiency and is easy to blast through road debris and bike paths.

For ardent fans of hip-hop music, who love the idea of ​​a low-maintenance commuter bike, State’s new Wu-Tang Clan range could be a hot buy.