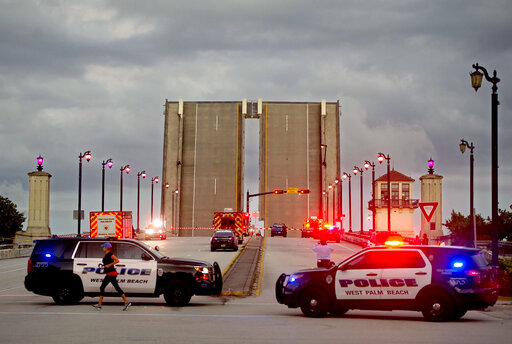 The operator of a drawbridge where a woman died last month was arrested on Thursday, five weeks after the incident, according to reports in South Florida.

Artissua Lafay Paulk, 43, of Greenacres, has been charged with culpable negligence manslaughter, the South Florida Sun Sentinel reported. She told authorities she checked four times for pedestrians before raising the Royal Park Bridge in West Palm Beach on Feb. 6, according to a Florida Department of Transportation report on the incident released earlier Thursday.

The bridge is operated under contract by Florida Drawbridges.

It was unclear from the FDOT report whether the bridge operator followed proper procedures, the Palm Beach Post reported. No procedures were outlined in the report and an operations manual written for the bridge does not show the procedures a tender should follow.

West Palm Beach resident Carol Wright, 79, was biking across the bridge around 1 p.m. that day when it began to open. Witnesses said she tried to hang on but couldn’t, and fell more than 50 feet from the base of the bridge, according to dispatches.

The FDOT report noted that Paulk told investigators she checked for people on the bridge and waited for a runner to pass safely before turning on the warning lights and raise the bridge for a boat to pass under. Authorities gave her a drug test and sent her home after the fatal accident. The prosecutor’s office had also requested a warrant to seize the woman’s cellphone records, the Post reported.

A lawyer for Wright’s family said the family was awaiting the results of a police investigation before deciding whether to press charges.

“Neither my clients nor I have taken a position on whether or not an arrest should be made,” attorney Lance Ivey said in an interview with the Sun Sentinel on Thursday. “But the fact that an arrest was made today seems to cast doubt on the veracity of the bridge operator’s post-incident statement that she did everything right.”

Wright was a retired journalist who was at one time the business editor of the Palm Beach Daily News. She later served as a spokesperson for the Palm Beach County Office of the Real Estate Appraiser.

The most important insurance news, delivered to your inbox every working day.

The history of cycling at the Olympics