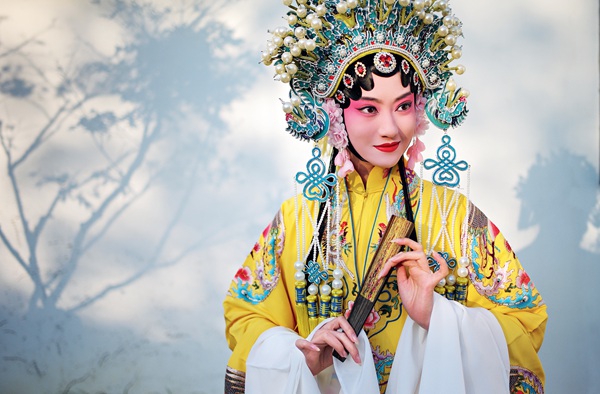 Traveling along the route, people not only visit the former residences of Peking Opera artists, but also see exhibitions and performances in theaters, which helps them learn about the history and culture of Peking Opera.

To the north of the square are Baishun Hutong and Shaanxi Lane. Binqingshe, one of the famous Peking Opera troupes at the turn of the last century, was stationed at Baishun Hutong. The narrowest part of the Baishun Hutong is less than one meter wide. While cycling through Baishun Hutong, one can appreciate the decorative elements of Peking Opera, and one can also experience the wonderful feeling of time travel.

Mei Lanfang Memorial Hall in Huguosi Street, Xicheng District, is a typical Beijing-style quadrilateral dwelling. It was established in 1986. The museum is the former residence of Mei Lanfang (1894-1961), master of Peking opera and founder of the Mei school of Peking opera.

After entering through the front door, one will see a bust of Mei, which stands in front of the screen wall in the courtyard. There are two persimmons and two crabapple trees in the yard, which means people want security and stability.

Mei spent the last 10 years of her life in the quiet and comfortable quadrangle. After Mei’s death, his wife, Fu Zhifang (1905-1980) and their children donated much of his valuable Peking opera material and literature to the Chinese government. The materials and literature are now kept at the Mei Lanfang Memorial.

The Jixiang Grand Theater is about five kilometers southeast of the museum. The theater is on floors seven through nine of the Yintai in88 shopping mall on Wangfujing Street.

It was originally located in the nearby Jinyu Hutong, and it was previously called Jixiang Tea House and Jixiang Garden. Jixiang in Chinese means auspicious.

Jixiang Tea House was built during the reign of Emperor Guangxu of the Qing Dynasty (1616-1911). It was a popular theater at that time, as many well-known Peking opera artists, including Mei, performed there. Mei held many performances at Jixiang Tea House, and it was designated as the base of the Mei School of Peking Opera.

Cycling east, about three kilometers from the Jixiang Grand Theater, one will see the Chang’an Grand Theater in Dongcheng District, on the north side of Chang’an Avenue.

Chang’an Grand Theater moved to Chang’an Avenue in 1996. The current venue is a national theater that integrates classical architectural style with modern science and technology facilities. Peking Opera masks, calligraphy and paintings are sold on the first floor. Stage photos and costumes of many Peking Opera performers are on display in the hall, located on the second floor.

The performance hall is decorated in the style of the Ming (1368-1644) and Qing dynasties, with mahogany tables and chairs in front, giving the audience the feeling of sitting in an opera garden under the Ming or Qing dynasty.

Equipped with modern stage facilities, the Chang’an Grand Theater is committed to providing an audio-visual feast for Peking Opera fans. There are simultaneous Chinese and English subtitles during each performance to help domestic and overseas viewers better understand the plot.

Zhengyici Theatre, which was built in 1688, is about 5 kilometers southwest of Chang’an Grand Theatre. Located on Xiheyan Street in Xicheng District, Zhengyici Theater is the oldest and best-preserved wooden frame theater in China.

Zhengyici Theater was once the hall of the Zhejiang Businessmen’s Guild in Beijing during the Qing Dynasty. Businessmen gathered at the theater during holidays and festivals, and they watched traditional operas. With the birth and growing popularity of Peking Opera, Zhengyici Theater has become increasingly popular with opera lovers.

During the reign of the Tongzhi Emperor of the Qing Dynasty, various Peking Opera performers including Cheng Changgeng (1811-1880) and Tan Xinpei (1847-1917) performed in the hall. Zhengyici Theater witnessed the birth and development of Peking Opera.

The 20-kilometer Peking Opera Culture Tour Cycle Route ends at the Beijing Overseas Cultural Exchange Center, near the northern end of the Chang’an Grand Theatre. The bicycle is an ecological and low-carbon means of transport. If one traveled 20 kilometers, it would generate at least 6 kilograms of carbon dioxide emissions. Beijing is a city with a rich culture and deep history. Cycling through the streets is a pleasant way to appreciate the charm of the city.