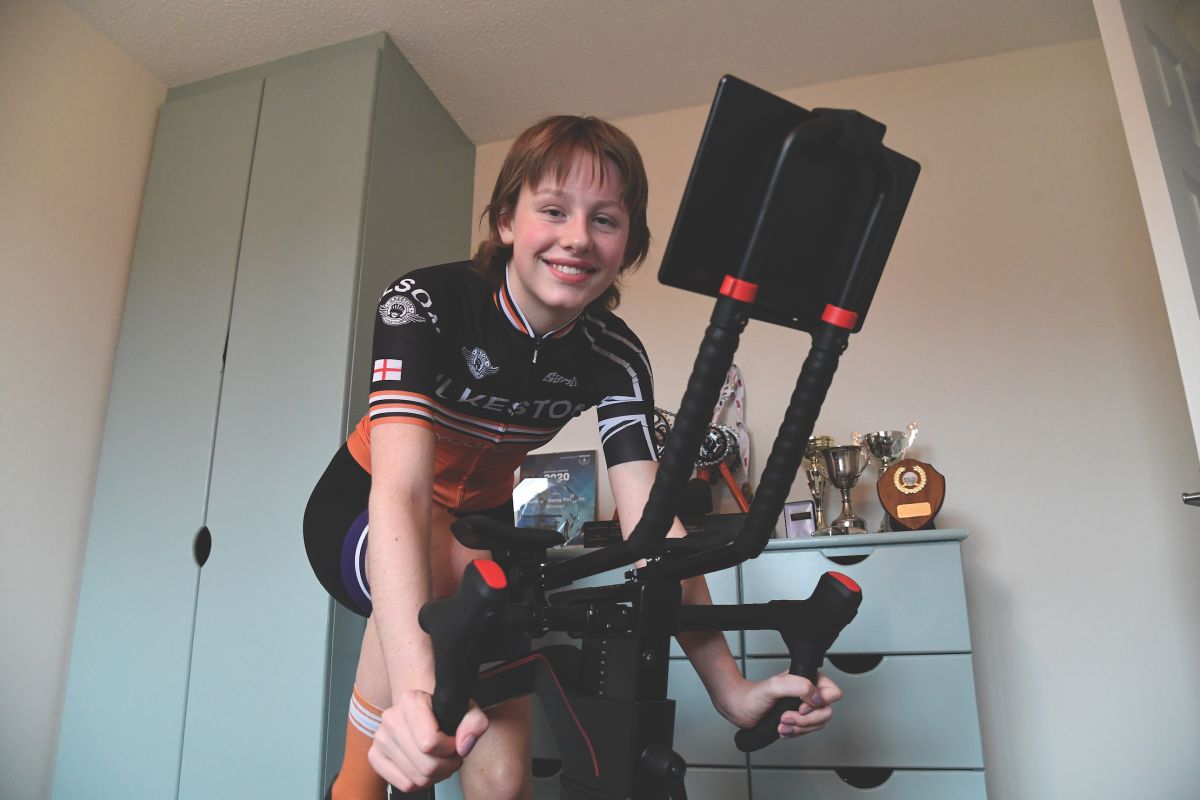 “Six months after I started riding the cyclo-cross season was just getting started, so I thought, why not give it a try?” It would be a brave leap into the unknown at any age, but Evie Hartley – who was just nine at the time – doesn’t talk about bravery. She simply tells me how cycling has become a central part of her life. I raced the first season and finished third in the girls, so that was pretty decent,” she smiles. “The following year I won the season.”

Evie, now 13, sits next to her father Dave, speaking to me via video call from their home in Ilkeston, Derbyshire. We’re here to talk about how Evie has coped since a life-changing diagnosis last year, and at first I’m nervous about asking questions that might be upsetting for her. As soon as the subject is broached, my worries vanish. “Basically, I started losing vision in my left eye,” she explains in a neutral tone, recalling the first symptoms in January 2021. “We went to the optician, who gave me sent to a specialist, and from there I got the MRIs that found the tumor. The calm and intelligent way the youngster recounts this terrifying chain of events is not only impressive, it is a lesson in humility.

CT scans identified a large tumor in the center of Evie’s brain, too deep to be surgically removed. The doctors faced a complex set of challenges, and their first priority was to relieve pressure on the optic nerve to save Evie’s sight. Dave is full of praise for the expert care provided from day one. “The dedicated NHS team led by Professor Richard Grundy have been amazing,” he says. “In the first few months, the treatment was aggressive enough – a long hospital stay with intense, high-dose chemotherapy, but after each dose, Evie bounced back.” It was a level of resilience the doctors had rarely seen – and Dave is sure Evie’s cycling background played a big part. “All of her baseline fitness levels were in good shape, and she has deep resolve anyway – those two factors together definitely made a difference.”

The year before, although Covid put racing on hold, Evie had maintained her fitness, largely by riding with her grandfather Paul Hartley. “Apart from a bad headache in August, I felt completely normal,” she recalls, “and I was doing loads on the bike – during lockdown my grandfather and I rode more than 2 000 miles.” The base miles have served him well in ways no one could have imagined.

The initial period of intensive treatment left the 13-year-old feeling devastated and unable to exercise for weeks at a time. Then there was another unwanted side effect. “Most of my hair fell out pretty much straight away,” says Evie. “All that was left I cut off and gave away.” It speaks to her character that in the midst of such personal trauma, she was already thinking of ways to put her experience to good use.

“In total, including all childhood cancers, there are 1,800 cases a year,” Evie explains the motivation behind her fundraiser, “so it’s super rare, especially brain tumors, and the first treatment I followed was 35 I thought there had to be a softer way – funding this research was something I really wanted to do Dave is President of Ilkeston CC, and many club members immediately joined in Evie’s fundraising (see box) Together they have raised over £50,000 – and counting – for the Children’s Cancer and Leukemia Group (CCLG). charity is almost enough to fund a whole new project,” adds Dave. He pays tribute to the support of local cyclists. “Honestly, the cycling community has been amazing – I can’t think of another community whose I would rather be part of… Not only our club, all the clubs in the region, everyone has supported us, and we cannot thank you enough.

After the first three months of treatment, Evie’s chemotherapy doses were reduced and she began to feel better. How long before it’s back on turbo? “Almost straight away,” laughs Evie, “and now I’m on the Wattbike pretty much every day.” Although most of her runs have been indoors, she ventured outside last summer and even felt well enough to take part in a few races. “I did a critical race, plus some hill climbs and TTs,” she says, “because those are the only events that haven’t been canceled due to Covid.” So far, doctors have had no objections to Evie’s cycling, and the morale-boosting effects couldn’t be clearer. “That’s what kept me going,” says the young runner, “and that’s the only thing I controlled – something I knew I could do however and whenever I wanted, and it was really good.”

Member of Ilkeston CC Emma Pilgrimwho has played a leading role in the club’s fundraising efforts, picks up the story:

“Evie is a much-loved member of the Ilkeston Cycle Club (ICC) and the Hartley name runs through the heart of the club. There was no doubt that we would support Evie and the family by raising money for a charity of their choice. It was a small way to show them that the whole club is with them on this journey.

“Once the CCLG [Children’s Cancer and Leukaemia Group] were selected, I created a JustGiving page (bit.ly/3rnSp22) and within 24 hours we were absolutely blown away by the response. It soon became clear that the first goal of £5,000 would be met and donations kept coming in. We then announced the “How Far For Evie” concept, and the level of support was overwhelming – as were the challenges people were willing to take on. prevail! It didn’t stop there; the generosity continued at our auction, where amazing gifts and experiences were offered and bids were placed the same day – again, it left us speechless.

“It hasn’t just been a club effort, the whole of Ilkeston and the wider cycling community have shown their support for the family, and we are very grateful for that.”

An additional morale boost came in April when Evie found herself on a virtual ride with none other than her favorite racer Geraint Thomas. “I only found out about it a few weeks before I got home from the hospital,” Evie says. “It was amazing – definitely one of my highlights.” An excerpt from the meeting, tweeted by Ineos Grenadiers, shows Thomas casually chatting with Evie via video link, offering advice on how to become a professional pilot. “I reminded him afterwards that that didn’t mean he had to go his own way in terms of the number of accidents,” jokes Dave. Then again, maybe that’s only half a joke, considering Evie’s ambitions. “Eventually, when I’m older,” she says with total seriousness, “I want to do the Tour de France.” I make encouraging noises before realizing that Evie hasn’t finished her sentence, “…and I want to win.” And she will win, if we are to believe the courage she has shown so far.

Last year, incessant treatment cycles meant Evie was out of school for the better part of eight months. What was it like finally getting into the classroom in August? “Very intimidating because at that time I was still completely bald,” she says, “and I had just had brain surgery. [for a biopsy], so I put on a hat. But it was fine. Everyone was afraid to ask questions at first, but once I started cracking jokes – I probably shouldn’t – they realized I was relaxed so they relaxed too. Again, I’m surprised – how does she stay so calm and considerate? “It’s been hard at times, I’m not going to lie about it,” she says, and the smile momentarily disappears, “but you kind of have to get through it, so I’d rather be quiet about it because it doesn’t matter. there’s nothing I can do to change it.

The long-term outlook for Evie is positive: although the tumor has metastasized to her spine, the oncologists treating her are confident that the main battle, shrinking the original tumor, is being won. and that is the key to stopping the spread and achieving a state of remission. “The prognosis is extremely good for Evie,” Dave later clarified by email, “she should live a long and normal life.” Evie isn’t off the hook just yet, of course, with her chemo program set to continue for another 11 months – but even in that she sees the bright side. “It’s actually kind of lucky,” she chirps, “because I should be finishing in November – just in time for the cyclo-cross season!”

This article originally appeared in the February 10, 2022 print edition of weekly cycling. Subscribe online and get the magazine delivered straight to your door each week.