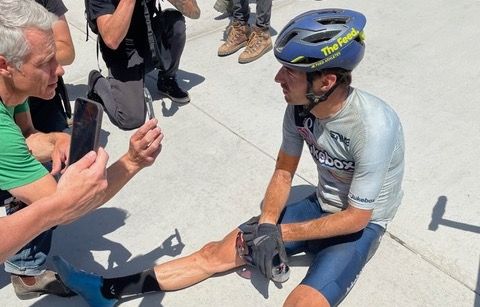 Alexey Vermeulen: “As a privateer, I earn more than in the WorldTour”

Alexey Vermeulen was going to be the next great American GC pilot. He put in strong performances as a junior and U23 rider and was part of the BMC development program for two years before signing a two-year deal with LottoNL-Jumbo aged just 20.

During those two years, the Michigan climber participated in 127 races in the yellow and black kit. From Classics and Monuments like the Fleche Wallonne, Liège-Bastogne-Liège, Strade Bianche and Il Lombardia to major multi-day events like the Tour Down Under, Abu Dhabi Tour, Tour de Romandie, Tour of California and Criterium du Dauphine. He got a taste of it all, and although he rode to support his senior team members, Vermeulen showed his talent with a Top 5 stage finish at the 2017 Critérium du Dauphine and a bronze medal at the US National Time Trial Championships.

But the magic of WorldTour racing quickly faded when LottoNL-Jumbo decided not to renew their contract. He then raced briefly with the Continental Interpro Stradalli Cycling team before getting into his own thing.

After an uncertain start, Vermeulen’s venture as a private rider with a varied schedule of road, gravel and mountain biking has proven to be not only very successful, but also lucrative.

“This is the first year – and I want to share this because I think income in the cycling world needs more exposure – that I’ve earned more than in the WorldTour,” Vermeulen said. weekly cycling.

“To be able to be one of 10, maximum 20 privateers who make full money from cycling, that’s pretty cool.”

As part of LottoNL-Jumbo, Vermeulen, then just 21, earned an annual salary of 65,000 euros, which he was “very, very happy about”, before dropping it without even explaining why. And to get to where it is today took a lot of guts, perseverance and well, marketing chops.

So how much does Vermeulen earn now?

“Over six figures,” said the 27-year-old. “And it does not depend on the results. It doesn’t depend on my schedule. I want it to grow so everyone can make a living doing what they love, because it’s been a struggle to get there.

“I also want to make it clear that part of that budget comes from what I do outside of my own racing, side projects and other endeavours. But that’s just being a complete privateer, I think it’s important these days that it’s not just about your race results, you have to find value for sponsors beyond you as a racer.

As American cycling grapples with its identity, culture and business, Vermeulen has carved out his own slice of the pie. His approach is twofold. On the one hand, he runs a unique, self-fixed schedule and builds an increasingly impressive track record. At the same time, he is getting into marketing, broadening the appeal and adding value to the still niche sport of cycling.

“I like the business side, but to be honest, it’s tough. Suddenly I have a real job. It’s such a stroke of luck, not a stroke of genius, but once you find them, you have to commit to being more than just an athlete, because professional athletes can be selfish,” Vermeulen said.

After his brief stint in the World Tour, Vermeulen knew he wasn’t done with race bikes and wanted to pursue his own program. He was only 23 after all and still developing a lot as a racing cyclist. He knew he wanted to build long-term relationships with the right brands and the right people and create something more meaningful. But forcing your own way is never easy.

“I came back from the World Tour and for two years I made $15-20,000 a year and lived with my parents,” Vermeulen said, adding that during that time he was looking for the right partners – those who were willing to play the long game. – while also establishing itself as an all-terrain racer.

That result finally came in 2019 at the Iceman Cometh mountain bike race in his home state of Michigan. The Iceman Cometh is one of North America’s most competitive point-to-point mountain bike races, traditionally held on the first Saturday in November. Vermeulen beat Brian Matter, Geoff Kabush and Ben Sonntag for a win that Vermeulen said felt like validation that leaving the mainstream road scene hadn’t been a big mistake.

Today, Vermeulen lives, like so many American professional endurance athletes, in Boulder, Colorado. He and his furry riding companion Sir Willie the Wiener (opens in a new tab), are an integral part of the off-road scene. He has consistently finished in the Top 10 at America’s biggest gravel and endurance mountain bike event, and will also make a serious bid for the stars and stripes at the US Pro Road Nationals in June as well.

It has found partners in brands like Enve, Pearl Izumi, The Feed and Wahoo among others, and is part of the non-traditional Jukebox (opens in a new tab) cycling team.

He is also one of the creators of From the Ground Up (opens in a new tab)a multimedia project born during the COVID pandemic that supports and films three ordinary people who discover cycling on their journey to the infamous Leadville 100. Through an application process, three riders receive the equipment, knowledge, training and the encouragement needed to finish the race and ultimately become lifelong cyclists.

“During the pandemic, all of a sudden athletes were valuable assets because there weren’t any events, and brands were looking at them as a way to spend the marketing budget. [Ryan Petry] and I came up with the idea as a way to support the companies that had supported us, but in a way that we could have an impact,” Vermeulen explained.

Vermeulen echoes sentiments many of us in the cycling industry have felt for years: the old way of sponsoring, doing business and fostering the community just doesn’t work in American cycling. It hasn’t worked since Lance Armstrong (opens in a new tab)it’s hay days.

“Cycling is still learning to speak for itself. For a long time, we only talked about people who were fit, fast and facing the Tour de France. But for the majority of people, like those who bought a Peloton a year ago, it doesn’t matter,” Vermeulen stressed.

It is this storytelling that is lacking in cycling in the United States, but where privateers can make a difference. With conflicting time zones and little television coverage of cycling, Americans are rarely exposed to the sport of cycling. And if they got a glimpse of a bike race on TV or at a city criterium, they wouldn’t know what’s going on or who to cheer for. Cycling is primarily a participatory sport in the United States, but it cannot grow with broader, non-endemic appeal.

“That’s the beauty of gravel. I don’t think it’s the gravel itself. It’s open to everyone, and there aren’t as many rules. You can go on an adventure or challenge yourself and have fun in a race with thousands of other people. Few people feel safe on the road and when you show up for a road race you immediately feel intimidated. Nobody talks, nobody hangs around. I don’t get it, and I love road racing, but I don’t see any value for sponsors in that right now,” Vermeulen said.

To help with the storytelling and exposure of the sport, Vermeulen said he actually spends a large percentage of the money he earns to have a photographer-videographer at the events he attends.

“And it’s not to show the race, but everything around it, which is much more interesting than seeing me cross the finish line,” he said.

“I think cycling works on a lot of things, but as the storytelling grows the interest in cycling will grow organically. You need the stories and the characters as well as the numbers and names on the jerseys like in other sports.

“People need to be unique and the fans need a chance to get to know them. I know, shirt sponsors are a very old-fashioned, very important thing in cycling, and I see the importance of that. , but if you’re actually selling something, it’s probably not because the brand is on a jersey, it’s because you’re talking about it organically.

Success on all terrains

Of course, as a professional athlete, competition matters and Vermeulen has ambitious goals.

“My goal is to have the ultimate year for privateers. I want to be a complete athlete. I want to win the Belgian Waffle Ride (Editor’s note: he did it!)I want to win the US Pro Nationals and I want to win Leadville or some other mountain bike race because that’s what people in the US are interested in right now,” Vermeulen said.

Vermeulen’s next focus will be the Unbound 200-mile gravel race in early June. He currently sits in seventh place in the LifeTime Grand Prix series. (opens in a new tab), just six points behind leader Keegan Swenson. While he has his eyes set on the series as a whole, Unbound is the only run that scares him. After suffering puncture after puncture, Unbound last year was a pure struggle. After that experience, Vermeulen said he hoped for a race without mechanics and a chance to actually be in the front runners of the race.

You can watch the race live on FloBikes, and if you do, be sure to cross your fingers for a puncture-free ride for Vermeulen.

A good cause: the Rotary club continues its project to donate bicycles for new Canadians