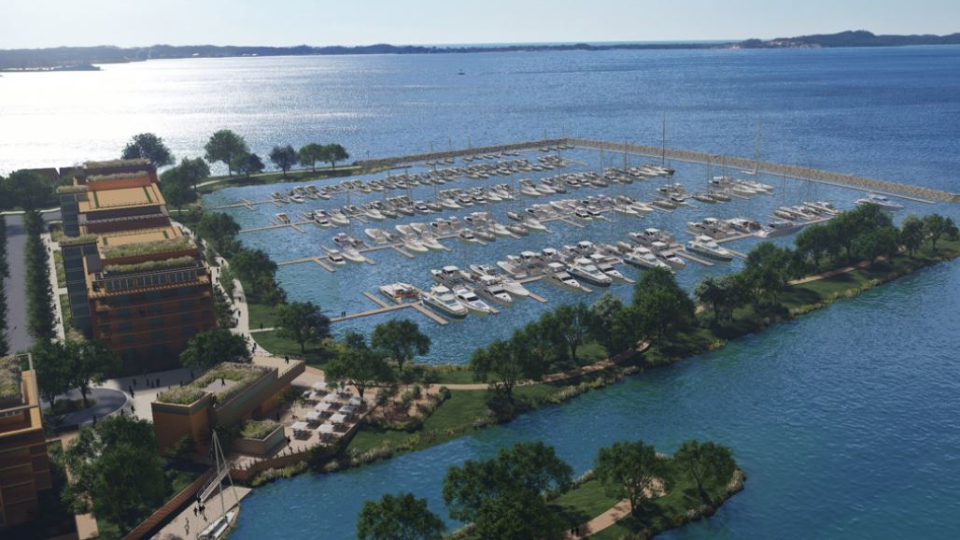 MUSKEGON, Mich. (WOOD) — Developers behind a $250 million project adding a marina, condominiums, retail and public spaces to Muskegon Lake has reached an agreement with the city.

Tuesday evening, the Muskegon City Commission unanimously approved a consent agreement with Adelaide Pointe that gives the developer access to the city’s boat launch for Adelaide Pointe’s in-and-out boat storage business. In return, Adelaide Pointe will give the public access to its peninsula and lakeside, which stretches nearly a mile, according to Adelaide Pointe co-founder Ryan Leestma.

The Public Use Agreement will remain intact as long as Adelaide Pointe uses the city boat ramp.
The new agreement replaces a consent agreement approved by the city last year. The measure had to be updated due to changes involving the project.

After a working session on Monday, planning staff updated the current agreement to remove an exclusivity clause to clarify that Adelaide Pointe could use the boat launch during the terms of the agreement. ‘OK. But a few residents have expressed concern that the city is moving too quickly in lakeside development.

“I agree these guys are very nice and the development is going to be wonderful, but how much do we need and where do we draw the line? And for me, we need time. I don’t think we’re taking enough time. We just removed our lake from the list of crappy lakes in the country and now we will instantly build giant waterscapes of docks, floating docks. And I understand that you can fish and you can walk and you can do these things. But how much should we do? asked resident Derek Olson.

“I just don’t want to see us do the same thing that previous generations did by building and filling the lake with things that aren’t natural and aren’t pristine,” Olson added.

Ryan Leestma responded to concerns by explaining how the development team plans to voluntarily invest $1.5 million to restore the lakefront.

“Our goal was to make everything better,” Ryan Leestma told the commission.

He says Adelaide Pointe will use a floating dock so as not to disturb the bottom of the lake, minimize the height of the rock face, and use Michigan fieldstones and logs to create a lake habitat. They also plan to add native plant species that survive and thrive in the lower light levels created by the docks.

Leestma says Adelaide Pointe will also minimize dredging and remove foundry sand dumped into the lake when the property was used for industrial purposes.

“No one in the state of Michigan has directly mitigated a dredging project,” Ryan Leestma said.

“What is the southern shore of Lake Muskegon historically? The place with more environmental injustice than anywhere but Detroit. It’s not good, it’s not good. Well, how can we solve this problem? We are making all these environmental improvements,” added Ryan Leestma.

“I just want to encourage everyone. There’s a lot of information out there. Everyone is very interested in seeing the best for Muskegon Lake and I think that’s a good thing,” resident Craig said. Person, who created a video about the development and spoke to environmental experts about it.

The space that the public would have access to would include a bike path, fish cleaning stations and grilling stations in addition to lake views.

Adelaide Pointe also plans to restore and re-open the boat launch to the community.

“It’s a big win for the City of Muskegon to officially have all of this public access,” said Ryan Leestma. “It’s a great opportunity. It’s something Emily and I are passionate about helping bring people to the lake.

Leestma said the next steps are to secure a development agreement from the city to pursue funding and obtain a permit from the Michigan Department of Environment, Great Lakes and Energy for the marina work.

“It’s a very long process. The DNR and EGLE obviously don’t look at projects like this very often. In fact, this is really the first major marina construction project that has taken place. in the state of Michigan for about 30 years. So the focus is on ‘how do we do this right?’” Leestma said.

” This is not the end. It’s kind of the beginning of the official we’re starting,” Muskegon Mayor Ken Johnson said.

Ryan Leestma says as soon as the EGLE permit arrives, the team will immediately begin working on the rock face. He said there was also $65 million in development projects he wants to start as soon as possible. He says that’s why he and Emily Leestma sold their Roger B. Chaffee resort in Grand Rapids for $11 million – a deal expected to close in the coming weeks.

Adelaide Pointe will also consider adding a 110-bedroom hotel to its plans in the future. If all goes well, the marina would be done in May or June 2023 and the multipurpose building would be done between August and November 2023 and then the cycle path would reopen.